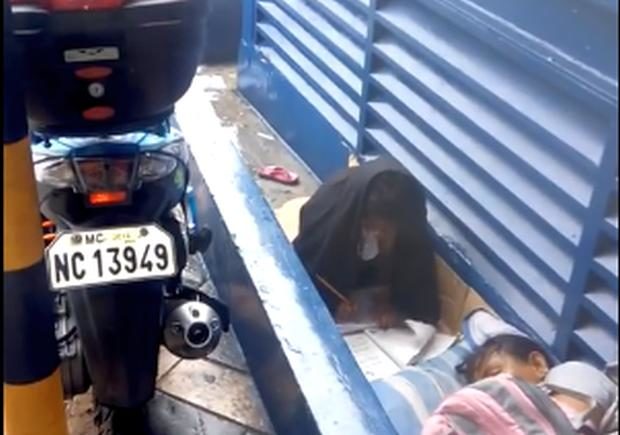 Eight-year-old Lorensalie Elaine Dolfu shield herself with black blanket as she studies in the rain. (Photo from a video posted on Facebook by ROLANDO VILLANUEVA)

When a homeless student was caught on video earlier this month as she studied under a blanket to avoid the rain, her story caught widespread attention, resulting in a viral Facebook post and a crowdfunding effort.

Asked about how the government has intervened on the girl and her family’s situation, the student’s mother, Ellen Dolfu told INQUIRER.net that they are part of the Pantawid Pamilyang Pilipino Program (4Ps) run by the Department of Social Welfare and Development (DSWD).

The 4Ps “invests in the health and education of children 0-18 years old from eligible poor households.” The program provides beneficiaries with “cash grants based on their compliance to their co-responsibilities.”

Ellen lamented that her family’s cash grants have been inconsistent in terms of the amounts they received and the frequency that they were able to receive them.

INQUIRER.net approached DSWD for their side which they addressed in an interview through Atty. Macario de Villa, 4Ps deputy program manager.

De Villa confirmed that the family of four has been a 4Ps beneficiary under the Modified Conditional Cash Transfer (MCCT) program since 2015. The Dolfus consist of Ellen; her husband Jerry, a sidecar driver; Lorensalie Elaine or “Jelen,” the third-grader in the viral video; and preschooler Alexandra Rose.

As with any MCCT beneficiary, the family is entitled to a health and education subsidy, provided that they fulfill the conditions to obtain these.

One family can receive P500 for the health subsidy given that they attend monthly family development sessions, receive prenatal care for pregnant women and have their children de-wormed as per Department of Health protocol. Missing any one of these will make them non-compliant.

For children in elementary school (preschool to grade school), P300 is given per child for 10 months if they maintain a minimum attendance of 85 percent.

They also receive a P600 rice subsidy which was implemented in 2017.

To assist with their housing situation, the Dolfus were given rental payment of up to P3,500 under the project Oplan Balik Bahay, Sagip Buhay (OBBSB). After a year, the family is expected to continue paying the rent because the MCCT interventions aim to help a family become self-sustaining.

According to DSWD’s records, there were times when the family failed to attend the family development session. Missing this means they would not be entitled to the health subsidy, which may be why they received different amounts throughout the year.

Ellen reasoned in the interview that their family has no mobile phone. She said that although they would follow up with their case worker on the schedule of the sessions, there have been instances when they would find out about it only after the fact.

DSWD also clarified Ellen’s concern that she was only able to receive the grant five times in a year. De Villa confirmed that disbursement is done in pay periods beginning from February to March — five in a year — for practicality, because the amount for a monthly disbursement would be too small both for the family and for government administration.

However, there was one year when Ellen said they only received P2,800. De Villa clarified that the family has been given regular disbursements and that DSWD will validate the family’s information with their disbursement data.

Because the MCCT targets homeless street families (HSF), one of its goals is to assist them in finding “decent dwelling units.”

But according to Ellen, they preferred staying in the streets because they were unable to maintain paying rent for another year and lived in poor conditions. The room where they resided could only fit the mother and her two daughters, had no electricity and was swarmed with rats. She did not mention if the government chose this or if the family did.

When told of this concern, De Villa said DSWD NCR would have to look into the matter since they are supposed to inspect a dwelling before signing a deal with the lessor.

Since leaving the unit, the Dolfus lived along a street in Malate, sometimes sleeping in the sidecar or staying in the front area of a condominium to have a roof over their heads, as seen in the viral video. 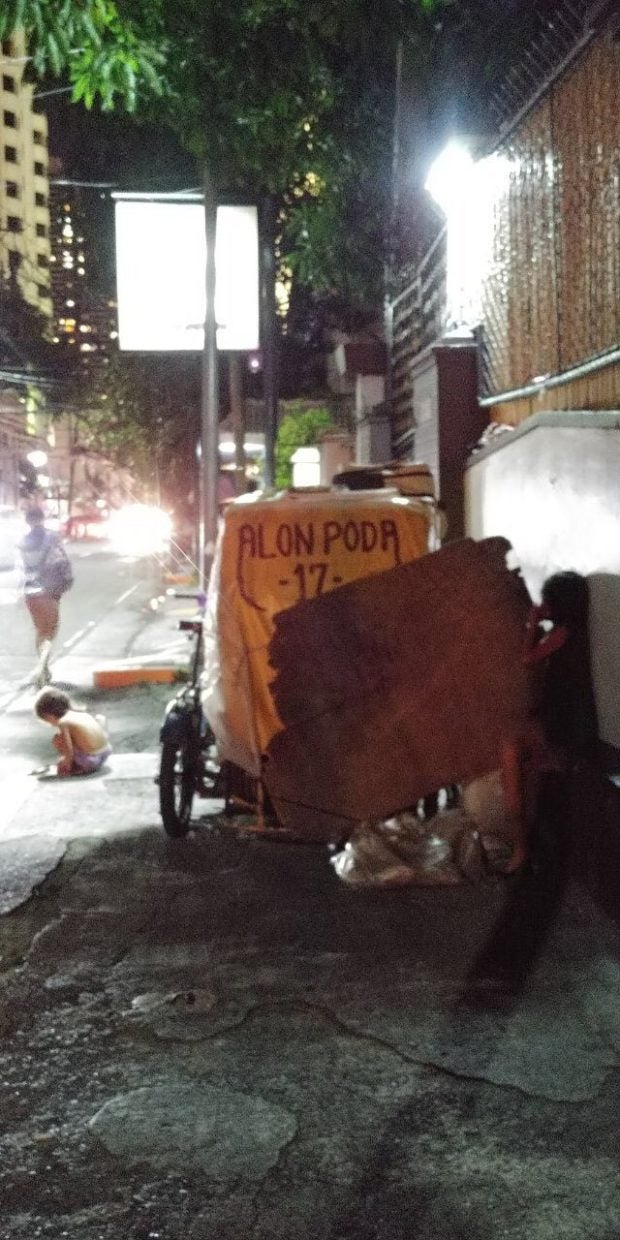 The Dolfu family lived along a street in Malate when they could not afford rent. Image: INQUIRER.net/Niña V. Guno

After a crowdfunding effort, the family now resides in a temporary apartment which has begun to be furnished. When asked how this would affect the family’s status in the MCCT, De Villa said the family would need to be assessed first on some criteria, including having a “regular dwelling.” It is possible for MCCT families to be “mainstreamed” into the regular conditional cash transfer, which is based on the Listahanan, a database of poor households.

When asked how else the government could intervene to help street families, de Villa stated that the local government unit (LGU) should coordinate with DSWD on the matter.

“First and foremost social welfare responsibility devolved na sa (to the) LGU as early as 1991 under the Local Government Code,” said de Villa. “Dapat LGU ang unang-unang nagcacater sa local constituent (The LGU should be the very first to cater to its local constituents).”

In the case of the Dolfus, the LGU is that of the city of Manila. But according to Ellen, at times it is the government themselves who would chase them off.

De Villa notes that the LGU has a memorandum with DSWD and that the agency even provides training so that they can fulfill their role of “socially uplifting” the marginalized in their jurisdiction. But if beneficiaries have such an experience with their local government, de Villa said it can be reported to their assigned case worker so that it could be raised during inter-agency meetings where 4Ps beneficiaries’ concerns are discussed.

Aside from a conditional cash grant, the 4Ps also refers beneficiaries to livelihood training created to alleviate poverty in a program where “beneficiaries receive cash grants based on their compliance to their co-responsibilities.”

“Yung mga nagsasabi na dole-out (Those who say that it’s a dole-out), they are not familiar with the program and they are basing their judgment or comment maybe on what they hear na (which is) unvalidated,” said de Villa.

De Villa clarified that 4Ps is intended to supplement a family’s income. “It does not intend to replace the household’s source of income, it is to augment,” he said.

The amount of the cash grant was based on the gap between the per capita income of people living below the poverty line and the annual poverty threshold back in 2008.

When asked why it hasn’t increased since then, he says DSWD has been negotiating for an increase in the subsidy: “Sa budget preparations, we are attempting to propose the increase. Along the process, di siya naaapprove (it doesn’t get approved).”

(The 2019 General Appropriations Act is being prepared now. It’s being talked about, it’s not materializing. When it comes to the lower house, it doesn’t get approved.)