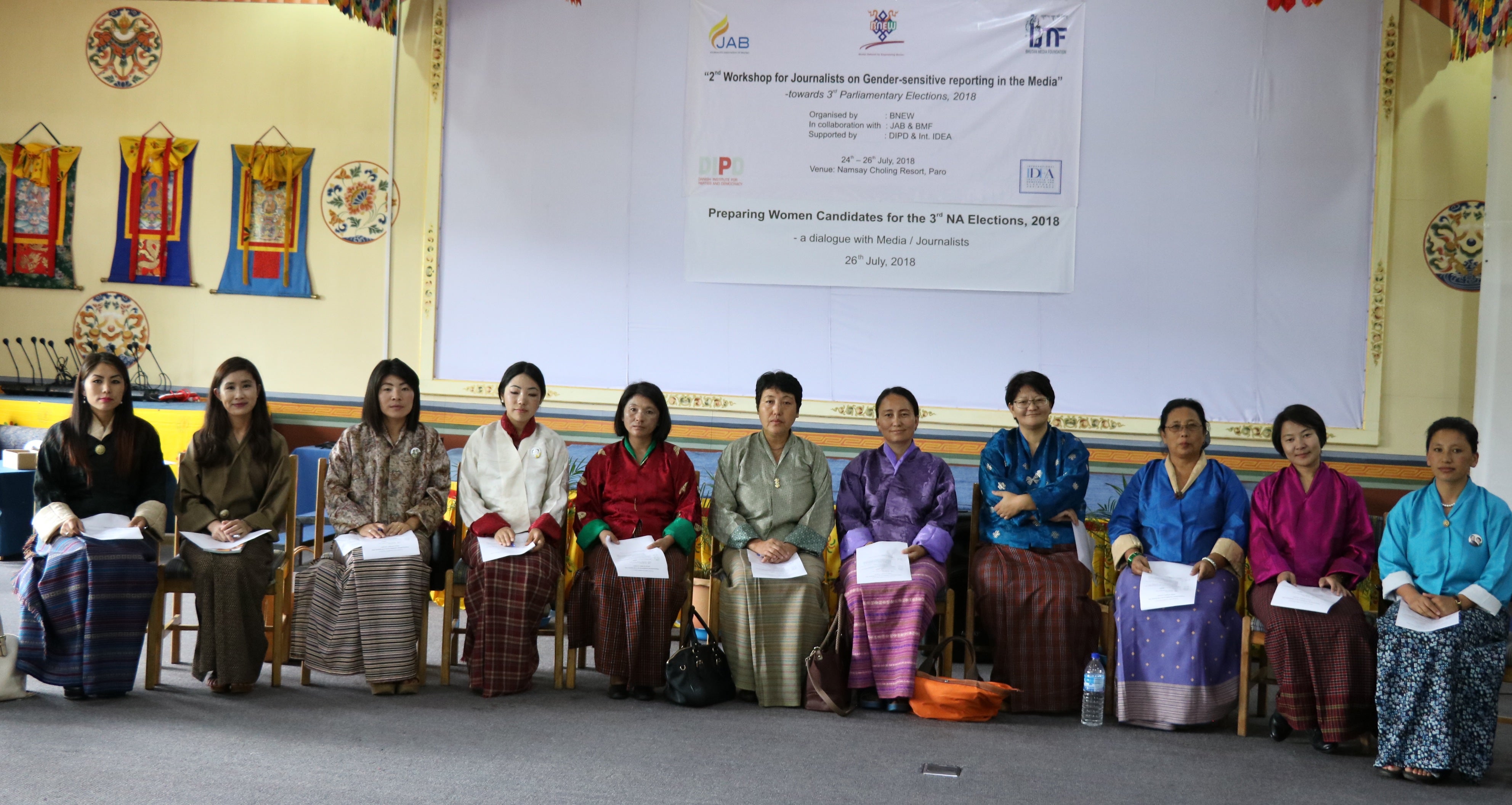 PARO, Bhutan — Of the 188 people who will represent the 47 constituencies from four political parties in the primary election for the National Assembly, only 19 are women, taking the women candidate percentage to 10.1 percent.

This was revealed recently when 11 aspiring women politicians from three political parties met with journalists in Paro at a dialogue organized by the Bhutan Network for Empowering Women (BNEW) in collaboration with Journalist Association of Bhutan and Bhutan Media Foundation. PDP’s women candidates did not attend the session.

The women candidates shared their experiences and expectations from the media and requested media to give them voice, face, and a platform.

Druk Nyamrup Tshogpa’s (DNT) candidate for Khamaed-Lunana constituency, Yeshey Dem, said choosing to join politics is difficult, especially for women, as she has to be mindful of even posting her own photos on Facebook.

“There are not only anonymous users attacking you with negative comments but also asking irrelevant questions like if I am married,” the 25-year-old said.

The other serious challenge, she said, is that male opponents look down on them, claiming women are inferior by nine generations and brainwash rural residents that women candidates will not be able to walk and deliver services. “It is difficult to convince people.”

Druk Phuensum Tshogpa’s Martsala-Jomotsangkha candidate, Norbu Wangzom, said rural voters still believe male candidates would be better than female. “I try to convince them that men would be physically strong but today, you just have to use intellect and women are equally capable.”

The mother of four said her opponents have been anti-campaigning that she delivered her two children during her tenure as Member of Parliament in 2008 to 2013. “But I never took a day off as maternity leave and never missed a session.”

Father of her first child is one of her opponents today.

Bhutan Kuen-yam Party’s Drujeygang-Tseza candidate, Chador Wangmo, said it is difficult for a woman candidate to even take along a male friend during familiarisation tours.

“I went for my familiarization during peak farming season and women were busy in the farm. If I faced a male companion, people would accuse me of having affairs. So I had to walk alone through forest,” she said. “If any male candidate come along with women, our people do not have any problems.”

The mother of one also contested for the National Council elections but could not get through the gewog nominations.

DNT’s Sombaykha constituency candidate, Dorjee Wangmo, said contesting against the Prime Minister is not an easy task. “I contested in 2013 too.”

She said media has to report on whether allocated budget reaches the communities. “If media persons travel to remote areas in my constituency, there will be many stories.”

DNT’s North Thimphu candidate, Dechen Wangmo, said media should not misquote but ensure that appropriate information is told to people.

DPT’s Mongar constituency’s candidate, Karma Lhamo, said media should reflect why people do not trust them and ensure it is not biased. “Media should be professional and ensure balanced reporting.”

She claimed media was not being fair when some papers only glorified one party and defamed another. “When I encountered a problem recently in Mongar, no media persons did the story. They were too scared to report it.”

DNT’s Bongo-Chapcha candidate, Tshewang Lhamo, said she had some bad experiences of being misquoted by the media. “But that will not stop me from working with the media.”

BKP’s Bardo-Trong candidate, Kesang Choden, said media was urban-centric and people in her constituency relied on Indian channels for entertainment. “Something must be done so that our rural residents watch our own channels.”

DPT’s Ugyentse-Yoeseltse candidate, Leela Pradhan, said women politicians had multiple roles to play, as daughters, wives and mothers. “But we come forward to serve the nation.”

BNEW director, Phuntshok Chhoden, said the number of women participants in the primary elections decreased to 19 from 31 in 2013.

“Politicians and media should work together. Media must ensure fair coverage for women candidates also,” she said. “I think there would not be a problem even if media houses profile the women candidates, as there are 169 male candidates.”