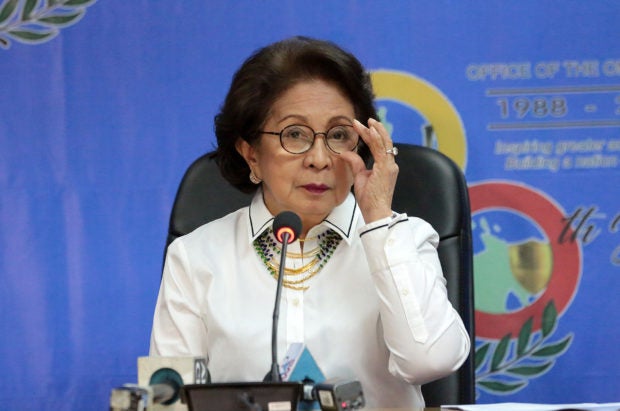 The incoming Ombudsman is very lucky because he will inherit an office that is much organized than it was before, former Ombudsman Conchita Carpio-Morales proudly said on Friday.

“If I found the office in disarray at the time? No complete records, no turn over, no inventory of cases that are going to be turned over to me,” she said when asked to describe the office that she inherited.

Morales said that she formed a committee to prepare the turnover of the office, which also include the complete inventory of cases that would be handled by Martires.

“To [the] reforms that we instituted, to the projects that we have been enhanced, to some programs that have been created, I will take pride to say that the incoming ombudsman is very lucky and I was not,” she said, eliciting laughter from a crowd of reporters.

The feisty Morales also said that she would pass on to Martires a “relatively lower” number of pending cases.

“I can assure you that the number of cases is much, much lower than what I inherited when I came in,” she said.

Morales said she inherited some 19,000 pending cases from her predecessor when she took the office in 2011.

She was appointed to the Office of the Ombudsman by former President Benigno “Noynoy” Aquino III.

In contrast, she said she’s leaving behind only 6,000 pending cases as of December last year. /jpv