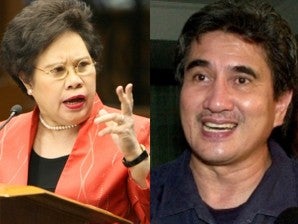 Two senators on Sunday warned the Aquino administration against possible international backlash if it insisted on holding former President and now Pampanga Representative Gloria Macapagal-Arroyo in a police detention facility, and urged she be placed instead under house arrest.

One of the senators, Gregorio Honasan, also said that Mr. Aquino’s current high trust rating among Filipinos would make it difficult for any restive elements in the military to move against the government “but let’s not tempt fate.”

Senator Miriam Defensor-Santiago said in a separate interview that she did not think “it’s fitting” to keep the former President in a police facility and added, in Filipino: “Let’s not embarrass her that way. So better put her under house arrest.”

State prosecutors have said that Arroyo, who has been placed under hospital arrest after being accused of election sabotage in connection with the 2007 senatorial polls, should be held in the Southern Police District’s (SPD) public information office, which is being transformed into detention quarters.

Honasan said the government could send the wrong signal to the global community, particularly foreign investors.

“I don’t see anything wrong with house arrest,” Honasan said in an interview. “The world is watching and whatever way we treat the ex-President would send a strong message of what we are to the rest of the world.”

If the ailing Arroyo is not given consideration, “foreign investors would think, ‘If this is how they behave, why would we invest?’” said the former Army colonel.

Santiago warned that subjecting Arroyo to “humiliation” by keeping her in a police facility “would also result in damage to democracy and our institutions. If we humiliate the former President, it would damage the presidency,” she said.

Santiago said there was no evidence “that an army of [Arroyo] supporters would attack, overpower the guards and take her away” and that fears of Arroyo escaping prosecution remained speculative.

She asked Malacañang to consider as a precedent the case of former President Joseph “Erap” Estrada.

“First, [Estrada] was in the detention cell (in Sta. Rosa, Laguna), then [at Veterans Memorial] hospital, then in his own house [in Tanay, Rizal]. The ending was that he was allowed to stay in his farm and that was the correct decision because he never intended to run away. So we should also give other ex-President the same kind of presumption,” Santiago said.

A check with the Philippine Daily Inquirer archives showed that Estrada was held in Camp Crame for five days after his arrest before he was brought to the Laguna detention facility.

“Power is not perpetual,” Santiago said. “It expires after six years so better think well about what you are doing now. Is that how you want to be treated eventually? If she is guilty, show your evidence first!”

Regarding the possible effect on the military of Arroyo’s detention, Honasan said: “While military elements may be affected by political tensions, I do not see any restiveness at this point. For now, that is still farfetched.”

“With the President enjoying a high trust rating right now, an attempt against his administration would be far-fetched,” he said.

The Social Weather Stations reported Mr. Aquino’s trust rating at 70 percent in September, while Pulse Asia had it at 75 percent. Pulse also reported a 77-percent approval rating for the PresidenT.

“It is hard to mobilize people [against the government] when politics is involved in the issues. This is based on the experience of the groups who attempted,” Honasan said.

He also said any action against the government would need a “credible personality or group” behind it.

“But let’s not tempt fate. Let’s not do anything that would worsen how things are right now,” he said.

Arroyo’s legal spokesperson, Raul Lambino, accused President Aquino of vendetta against her in view of her administration’s move in the past to redistribute to farmers the Hacienda Luisita sugar plantation owned by the Aquino and Cojuangco families. Mr. Aquino has said he has divested himself of his share in the plantation.

“‘We firmly believe that the motive of P-Noy [Aquino’s monicker]in going after PGMA [President Gloria Macapagal-Arroyo] with more intensity to persecute her are vindictiveness and personal vendetta,” Lambino said in a statement.

“The recent SC [Supreme Court] decision got the ire of P-Noy and the Aquino-Cojuangco family with PGMA at the receiving end of their fury,” he claimed. “This is the reason why government changed its earlier offers of hospital or house arrest and is taking a hardline position to detain PGMA in SPD or city jail.”

Arroyo’s allies clamoring for “humane treatment” for the Pampanga representative in view of her poor health and of her being a former president.

North Cotabato Governor Emmylou T. Mendoza said that while Arroyo had nothing against the government putting up a “good fight” against Arroyo, it should be made against “an opponent who is physically fit and can stand trial.”

Justice Secretary Leila de Lima for her part expressed concern yesterday over a story carried by the Inquirer on Friday which reported a senior government  official as saying that Arroyo’s doctors at St. Luke’s had refused at one point to sign a medical certificate prepared by her lawyers.

“That’s a serious matter that necessitates intervention by professional organizations [like the] PMA [Philippine Medical Association],” De Lima said in a text message to reporters.

“That also smacks of coercion, if not obstruction of justice. These doctors’ rights are being grossly violated,” she added. With reports from Gil C. Cabacungan Jr. and Marlon Ramos