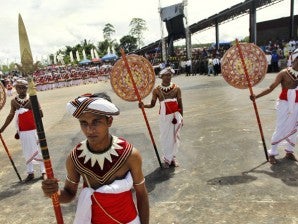 President Mahinda Rajapakse, who opened the expressway by unveiling a plaque at the main entry point in Galle, drove a short distance before addressing a public rally where he promised a highway “revolution” on the island.

“Separatist tendencies will fade away when we have better road connectivity,” Rajapakse said referring to the island’s drawn out ethnic war, which ended in May 2009 with the crushing defeat of Tamil Tiger rebels.

“There will be a revolution in road construction,” he said, adding that the government plans to construct another expressway linking Colombo to the Tamil-dominated Jaffna region in the north.

But it was competed three years behind schedule, with two interlinking bridges collapsing, killing a pedestrian, during the early stages of the work. Land acquisition and funding shortfalls caused further delays.

“The new route will reduce congestion on the main (coastal) highway to Galle,” the Deputy Highways minister Nirmala Kotalawela said, adding that the roadway will boost the southern region’s economy.

The Tamil Tigers had campaigned for a separate state for island’s ethnic Tamil minority and controlled nearly a third of the island’s territory at the height of their power.