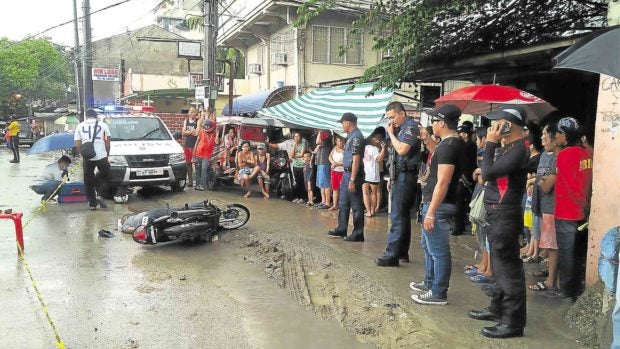 CHILLING SIGHT A man once convicted of a drug-related crime lies dead in Mandaue City, Cebu province, after he was shot by assassins. —NORMAN MENDOZA/CEBU DAILY NEWS

CEBU CITY — The chief of the Central Visayas police, echoing President Duterte’s order to continue the war on drugs with the same intensity as when it started, warned drug suspects in the region “you better stop now” because the campaign against drugs would be “really chilling.”

“This intensified campaign against illegal drugs chooses no one,” Sinas said in an interview on Tuesday.

“Whoever you are, as long as you’re into this illegal trade, the long arm of the law will soon catch up with you,” he said.

In his third State of the Nation Address (Sona) on Monday, President Duterte said the war on drugs, his centerpiece program, was far from over.

He said a sign of the drug trade defying his campaign was the higher volume of drugs being seized.

“I can only shudder at the harm that those drugs could have caused had they reached the streets of every province, city, municipality, barangay and community throughout the country,” he said.

“This is why the illegal drug war will not be sidelined. Instead, it will be as relentless and chilling, if you will, as on the day it began,” he added.

In response to the President’s statement, Sinas said Cebuanos can expect more antidrug operations in the coming days.

“We will enhance our operations and it will really be chilling,” he said.

Since the Duterte administration launched its bloody campaign against illegal drugs in July 2016 at least 195 drug suspects in Central Visayas were killed in supposed gunfights with policemen and the Philippine Drug Enforcement Agency (PDEA).

At least 213 others were gunned down by still unknown assailants, while some 13,050 drug suspects were arrested in Cebu and other parts of the region.

Sinas said law enforcers were not done yet.

“So if you are involved in the illegal drug trade, you better stop now,” he said.

“If you’re on the verge of arrest, you better surrender peacefully because our operatives are also ready to protect themselves,” he added.

“Don’t force us to defend ourselves,” he said.

The bloody war against drugs has been criticized by human rights advocates and the Catholic Church for the thousands of deaths of suspects without due process.

President Duterte, however, was unmoved by the criticisms.

“If you think that I can be dissuaded from continuing this fight because of (your) demonstrations, your protests, which I find, by the way, misdirected, then you got it all wrong,” he said.

“Your concern is human rights, mine is human lives. Human rights to me means giving Filipinos, especially those in society’s fringes, a decent and dignified future through the social and physical infrastructures necessary to better their lives,” he added.