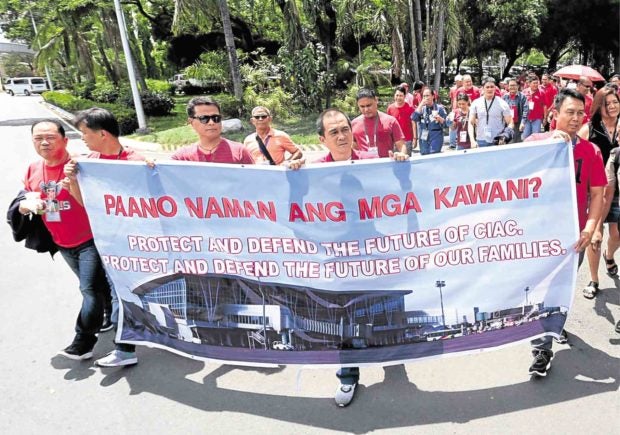 Clark workers rally to demand transparency and security of tenure in plans to privatize airport operations at the Clark freeport. —TONETTE OREJAS

Bañez said the union had opposed the privatization plan because of its impact on the job security of 315 regular employees of the state-owned Clark International Airport Corp. (Ciac).

Also in the employ of Ciac are 152 agency-hired security guards, 103 support staffers, 75 janitors and 30 project-based workers.

The airport privatization project was raised to President Duterte during a news briefing on July 10 when he attended the national conference of micro, small and medium enterprises at the Asean Convention Center here.

“Well, that has to be discussed. Nothing is final yet. It has to be the decision of Congress and the Cabinet. It’s always a joint effort,” President Duterte said.

“No one in this government can say what will happen or what. You have to contend with the government itself because Congress is likewise there to protect the interest of the people and the money. Remember it costs us money to build it,” he said.

Instead of a congressional nod for the privatization of the operations and maintenance of CRK, BCDA got on April 25 the approval of the National Economic and Development Authority board, chaired by the President, for a plan to privatize the airport operations.

Vivencio Dizon, BCDA president and chief executive officer, said he would not comment on how President Duterte’s remarks would affect the bidding of CRK’s operations and management that began on April 30.

BCDA said it expected the contract to be awarded on Aug. 30.