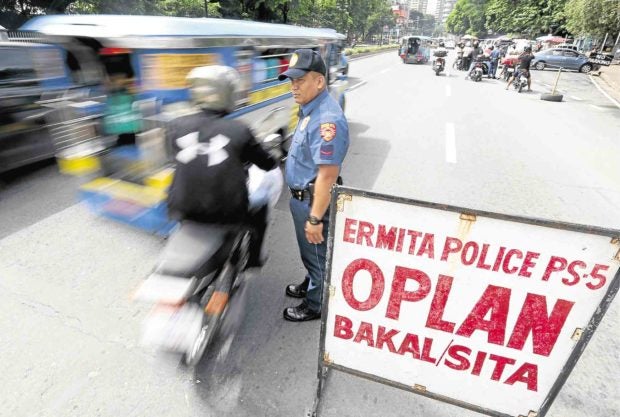 Motorcycle owners in Manila will soon be required to get a “clean rider” sticker from the Manila Police District (MPD) as part of its crackdown on tandem-riding criminals.

In an interview, Supt. Carlo Magno Manuel, head of MPD’s public information office, said the stickers would be distributed free of charge.

“The vehicle owners just need to go to the police station that oversees their neighborhood, submit proof of ownership and get the sticker,” Manuel told the Inquirer on Thursday.

He said the stickers would help fast-track the checking of motorcycles, which were usually the vehicles monitored and thoroughly scrutinized at police checkpoints.

“The sticker on the vehicle means it has been cleared by the police,” Manuel added.

He clarified, however, that having a clean rider sticker was not a guarantee that a motorcycle owner would no longer be flagged down by the police.

“It would just speed up the process of verification,” Manuel said.

He also warned that motorcycle drivers who do not own the vehicle bearing a sticker would be required to get an authorization letter from the owner.

“This is to ensure that the vehicle was not stolen,” Manuel said.

Although the clean rider program has yet to be launched, some motorcycle owners have already started registering their vehicles with police stations in their respective areas, according to Manuel.

The launching of the clean rider program was supposed to be held today but it was moved to 5 a.m. on Aug. 1 at Quirino Grandstand in Rizal Park.

The clean rider program is already in effect in Central Luzon, where it was launched by the regional police office in March.