Over 40 people missing in Myanmar landslide 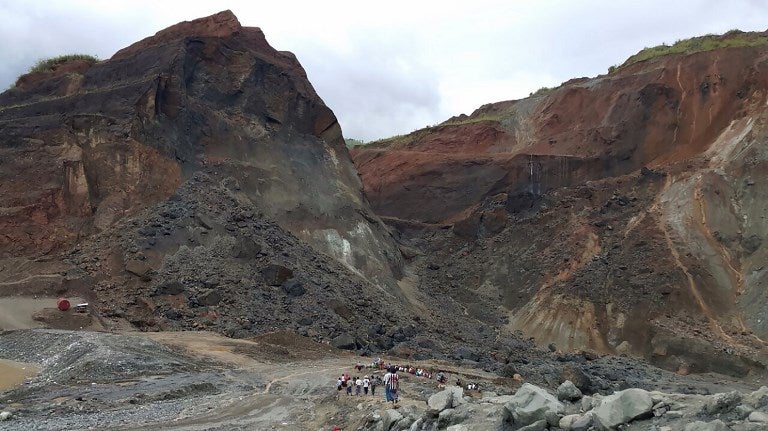 In this photograph taken on May 24, 2016, rescue workers gather beside a landslide in a jade mining area on the outskirts of Hpakant in Myanmar’s northern Kachin State. A landslide in Myanmar’s northern jade mining region has killed at least 12 people and many more are missing, officials said, the latest deadly accident to hit the shadowy but lucrative industry. / AFP FILE PHOTO

MYITGYINA, Myanmar — A landslide occurred yesterday in an expired mining plot near lower Metlinchaung village, Seikmu village-tract, Hpakant where 40 scavengers were missing as a result.

“I returned from the incident which is about 1 mile distance of Mapyin village. Witnesses said that there were over 30 people buried in the landslide. Now, the registered list shows that 25 people were missing. Most missing people were Rawun ethnics. The height of mine dump is about 1,000-ft and the length is about 700-ft. The mining companies dug deep for the jade. So, the scarps became the height. The landslide of mine dumps was mainly caused by the rain. It is impossible to rescue the missing people. We heard that the expired mine plot produced good quality jade in opening season. Due to that, there were a lot of jade scavengers,” said Shwe Thein yesterday after observing the collapse.

“We asked witnesses that said that there were about 40 people buried at the mine dump. Nine people are being registered as missing. We can’t carry out a search operation. The administrative department and we returned from the incident. The height of the soil dump is like a three-story building with length about 1,000-ft. The water filled around the dump. At present, the landslide may occur again. However, we saw the jade hunters near the soil dumps. When we returned back from the incident, missing nine people were registered,” said Moe Moe, a member of National League for Democracy in Hpakant Township.

Likewise, there was a landslide in Maha jade old mining plot in Hpakant Township on July 14th killing 22 people and injuring 63 with four missing.

The number of scavengers killed in Hpakant region this year has exceeded 100 people. In Hpakant region, there are around 300,000 migrant workers from the four corners of the country.

There are frequent outbreaks of landslides, especially in the monsoon. More than 20 villages near jade mining blocks are in danger of landslides.