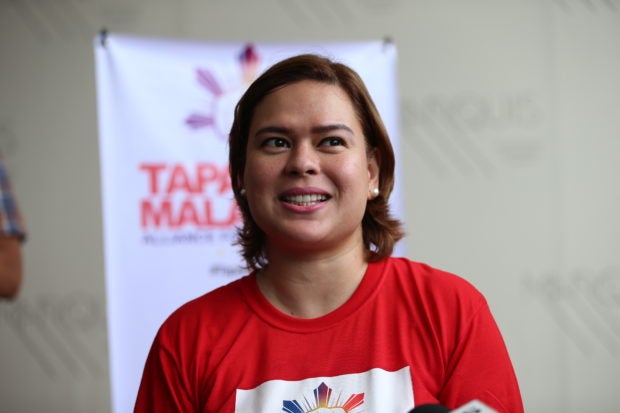 Call her the kingmaker — or queenmaker — of the House of Representatives.

Though she’s not a member of Congress, fingers are pointing to Davao City Mayor Sara Duterte as a moving force in the ouster of Speaker Pantaleon Alvarez and the installation of former President Gloria Macapagal-Arroyo in his place.

“It’s no longer the majority—it’s the mayor,” Tinio told a press briefing on Wednesday.

The opposition lawmaker characterized Mayor Duterte’s apparent emergence as a “power behind the throne” in Malacañang as an alarming development.

But Deputy Speaker Fredenil Castro, one of Arroyo’s top allies in the House, said Mayor Duterte was well within her rights to lobby lawmakers.

“It is her right to campaign for anyone who is running for a public position and I don’t see anything wrong if you campaign for a candidate,” Castro told reporters on Wednesday.

Castro deflected questions on whether Sara Duterte had really phoned House members to eject Alvarez from the speakership.

“Some have said so, and in fact it has been going on around that Mayor Duterte called some people to strengthen the move to unseat Speaker Alvarez, but I am not aware of it,” he said. “As a matter of  fact, I was waiting for her call, but she did not call me,” he added.

Minority Leader Danilo Suarez, another staunch Arroyo ally, would not give a direct answer when asked if he received a call from the younger Duterte.

“I did talk to Sara . . . We talked about motorcycles,” Suarez said.

The President’s 40-year-old daughter has neither confirmed nor denied seeking the support of House members to unseat Alvarez.

On Tuesday, she publicly congratulated Arroyo, whom she described as a “strong leader.” She did not comment on the speculations about her role in the speakership battle.

But both administration allies and critics alike see Sara Duterte’s hand in the dramatic events that unfolded on Monday, upstaging even the third State of the Nation Address (Sona) of her father.

“I think it was more the rift of the Speaker with Mayor Sara,” Umali told reporters on Tuesday.

In February, the Davao mayor blasted Alvarez for supposedly calling her newly formed Hugpong ng Pagbabago regional party part of the opposition and for telling a crowd that he could impeach her father—charges the former Speaker denied.

In the end, Tinio said Alvarez’s removal could not have happened without the President’s blessing.

“We all thought Speaker Alvarez was such a diehard who took extreme measures to please the administration, but it turned out there was a bigger fish, which is why he was set aside,” Tinio said.