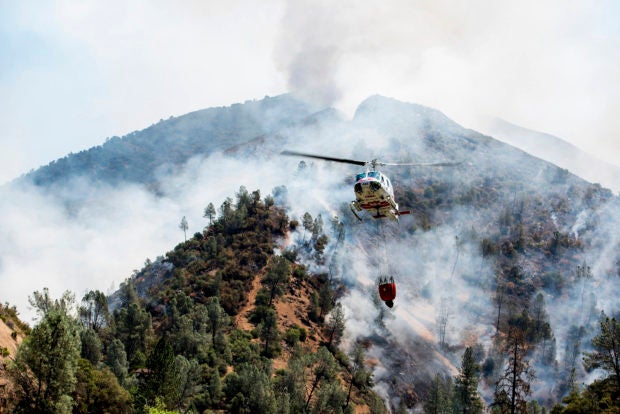 A helicopter gathers water from the Merced River to fight the Ferguson Fire along steep terrain behind the Redbud Lodge near El Portal along Highway 140 in Mariposa County, Calif., on Saturday, July 14, 2018. Andrew Kuhn /The Merced Sun-Star via AP

Los Angeles, United States – One of the most popular national parks in the United States announced its imminent partial closure on Tuesday as thick plumes of smoke drifted from a deadly wildfire raging in central California.

Yosemite National Park said the Yosemite Valley – home to many of the cliffs and waterfalls that make the area famous – would shut at noon on Wednesday.

Wawona, a settlement of around 160 people and a 40-kilometer drive to the south, will also close, with both areas expected to reopen on Sunday.

“These closures include all hotels, campgrounds, and visitor services in Yosemite Valley and Wawona,” park authorities said.

“Park visitors currently staying in park campgrounds and lodging facilities are asked to be out of these areas by noon tomorrow,” they added.

The Ferguson Fire, which started on July 13 in the Sierra Nevada mountains, has destroyed 36,500 acres or 14,800 hectares of vegetation, according to InciWeb, the Forestry Service’s incident information website.

“Much of the fire is burning in steep, rugged terrain with little to no access roads. Mandatory and advisory evacuations are in place in several areas but no homes have been damaged or destroyed,” it said.

Since Ferguson broke out, a 36-year-old firefighter has died and six others have been injured. InciWeb said 3,311 personnel were battling the blaze with almost 200 engines and 16 helicopters.

Yosemite – the fifth most visited US national park in 2017 – is open all year but three-quarters of visitors come from May through October, peaking at more than a million across July and August.

Authorities warned of air quality in the area becoming “unhealthy to very unhealthy” during the afternoon before improving overnight.   /kga