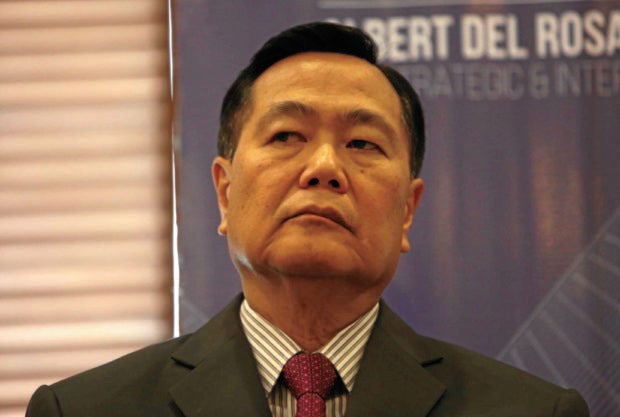 Filipino voters who are not content with the government’s “appeasement” policy towards China will convert their position into votes in the coming 2019 elections, Supreme Court Acting Chief Justice Antonio Carpio warned Tuesday.

“If the Duterte administration still refuses to heed the sentiment of the Filipino people and continues with its appeasement and defeatist policy, the Filipino people will convert their sentiment into votes in the coming 2019 elections. That is how our democracy works under the Constitution,” he said in his remarks at the book launch of Rock Solid: How the Philippines Won Its Maritime Case against China written by veteran journalist Marites Danguilan-Vitug.

Recent surveys conducted by public opinion polling bodies showed that Filipinos are not satisfied with the government’s policy towards China on the South China Sea dispute.

A survey of Pulse Asia revealed that 73 percent of Filipinos want the arbitration ruling to be enforced. Surveys of Social Weather Stations similarly showed that majority, or 81 percent, of Filipinos repudiate the government’s non-enforcement of The Hague ruling, while 87 percent wants the Philippine government to retake the islands controlled by China in the Spratlys in the West Philippine Sea.

“We have to grow the number Filipinos demanding enforcement of the ruling to over 90 percent so that the Duterte administration can no longer ignore the sentiment of the Filipino people,” Carpio said.

The magistrate said this was “very doable” given the recent survey results.

“It is just a matter of explaining to the people that the first step in retaking our islands is to enforce the ruling,” he noted.

The administration has been criticized for squandering the gains of the landmark ruling in 2016 in exchange for economic investments and closer ties with China.

Two years ago, the Philippines won a stunning victory on its maritime case against China, which invalidated the regional power’s nine-dash line in the South China Sea.

Carpio pushed for the filing of the historic maritime case of the Philippines against China, which led to its eventual win. But when the new administration took over, it downplayed the ruling.

The arbitral decision on the maritime case favoring the Philippines was handed down on July 12, 2016, or two weeks after Mr. Duterte assumed the presidency at 12 noon of June 30, 2016 as mandated under the 1987 Constitution.

“I never thought for a moment that we have to first convince our own Philippine government that it is to the immense benefit of the Philippines and the Filipino people to use the ruling to protect and preserve Philippine sovereign rights in the West Philippine Sea,” Carpio said.

“Worst of all, I never expected that our own President would announce publicly that he was ‘setting aside’ the ruling,” he added.

Carpio insisted that Sandy Cay, a geological feature near the Philippine-occupied Pagasa Island (Thitu), was seized in 2017 by China the same way as Scarborough Shoal in 2012. The government claimed that Sandy Cay remains unoccupied neither by Chinese nor Filipinos.