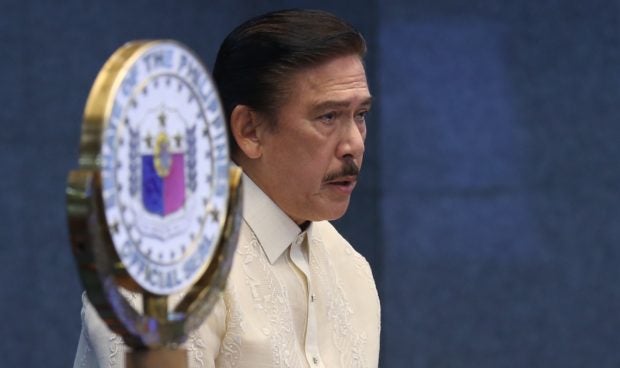 President Rodrigo Duterte nearly walked out after the leadership squabble between his allies in the House of Representatives broke out and nearly derailed his State of the Nation Address (Sona) to a joint session of Congress on Monday, according to Senate President Vicente Sotto III.

Pampanga Rep. Gloria Macapagal-Arroyo tried to wrest the speakership from Davao del Norte Rep. Pantaleon Alvarez less than an hour before the President was scheduled to speak.

Arroyo and her allies held a vote to unseat Alvarez, but this happened without the House formally reopening the session and without the mace on the floor.

Sotto was among the officials, including Alvarez, who welcomed the President to the House.

Sotto said Arroyo was installed in a rump session. He said the President knew it and talked to Arroyo to tell her that they should “do it properly.”

“He was displeased with what was happening. Almost walked out. My Senate contingent would have followed him out if he did,” Sotto said in a text message on Tuesday.

He told reporters in a separate interview that as soon as the President arrived at the House, he “uttered words that I don’t want to divulge.”

‘None of his business’

When the President threatened to walk out, Majority Leader Rodolfo Fariñas told him that it was his constitutional mandate to address the nation.

But the President was not protesting Arroyo’s election as Speaker, Sotto said.

“He said it’s none of his business, but they should not disrupt the Sona because it is mandated by the Constitution,” he said.

The President did not want to go out to the session hall without the problem being solved first, Sotto said.

Deputy Speaker Fredenil Castro said in a television interview on Tuesday that since Alvarez refused to recognize her election, Arroyo allowed him to do his duty during the joint session.

It was Alvarez who opened the joint session for the House and sat with the President and Sotto on the rostrum.

But after the President’s speech, the House resumed session, where Arroyo won support from 184 members and was installed as Speaker. —With a report from Cathrine Gonzales