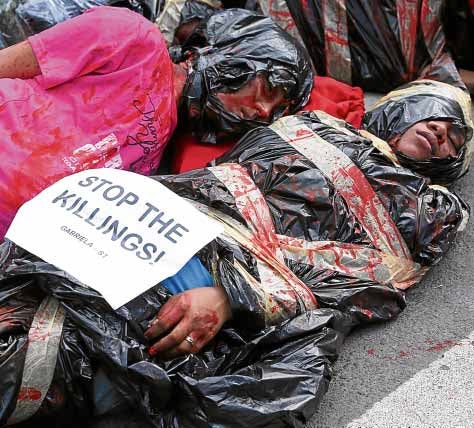 On Human Rights Day last December 10, 2017, activists dramatize victims of summary killings that they blame on the war on drugs being waged by the Duterte administration. —MARIANNE BERMUDEZ

It is illogical to claim concern for human life but not for human rights.

This was the assertion of Caloocan Bishop Pablo Virgilio David as he criticized President Rodrigo Duterte’s incongruous logic in a bid to once again justify his administration’s brutal campaign against illegal drugs.

In his third State of the Nation Address (Sona), Duterte chided critics of his bloody war on drugs and said: “Your concern is human rights, mine is human lives.”

“The lives of our youth are being wasted and families are destroyed, and all because of the chemicals called shabu, cocaine, cannabis, and heroin,” Duterte noted in his 48-minute Sona on Monday.

But David said the Church “can never agree with such a statement” that is plainly inconsistent “but not really surprising” coming from Mr. Duterte.

“Is not the right to life the most basic human right? Such a statement implies that the victims of drug-related killings are not human lives,” the bishop said in a statement issued after Duterte’s Sona.

“The statement is illogical but not really surprising because it has been stated plainly on several occasions. I wonder if we can find one civilized nation in this world that would agree that addicts are ‘not human’?” he asked.

David stressed that addicts are “sick people” who needs to be saved, and that the government should focus its campaign against big-time drug suppliers.

“How come the supply of illegal drugs remains steady in spite of all the killings? Is it not obvious that addicts and small-time peddlers and pushers are not the root cause of the drug problem?” David asked.

David said that while they agree that an anti-illegal drugs campaign is necessary, the Church’s call to end the killings of drug war victims will remain as their “stubborn and relentless plea.”

“Is it not obvious that addicts and small-time peddlers and pushers are not the root cause of the drug problem? Isn’t it obvious that they are also victims, and that they also need to be saved, not killed?” he said.

“The fight against illegal drugs must indeed be relentless, but the killings—either by the police or by masked vigilantes—must be stopped!” he added.   /kga