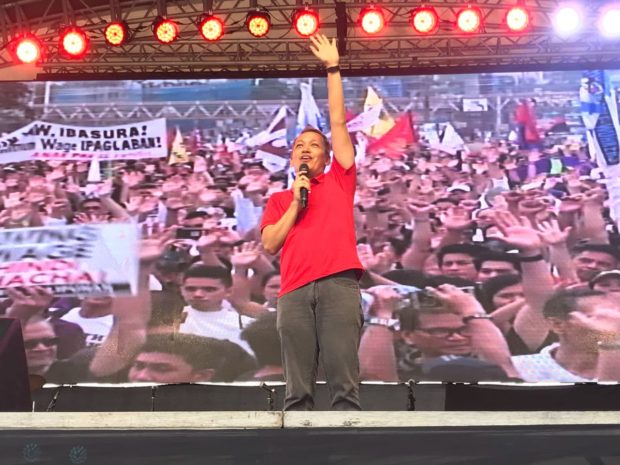 If there is one notable achievement by President Rodrigo Duterte for his third State of the Nation Address (Sona), government critic Renato Reyes believes that Duterte has united the opposition.

Reyes, secretary general of Bagong Alyansang Makabayan (Bayan) secretary, said Duterte deserves to be thanked for uniting all members of the opposition, whatever their affiliation may be, against the administration.

“He has united the people,” Reyes said in Filipino before thousands of protesters at the “United People’s Sona” along Commonwealth Avenue.

The United People’s Sona, staged in front of the St. Peter’s Parish along Commonwealth Avenue, was joined by various leftist and moderate anti-Duterte groups.

The people’s dissent against Duterte, Reyes said, would not falter even if Duterte is backed by “foreigners from the United States and or China.”

If the Marcos dictatorship which spanned for 20 years was stopped, Reyes said Duterte’s “dictatorship” will soon fall too.

“The Marcos dictatorship fell. There is no forever for dictators,” he said.   /vvp