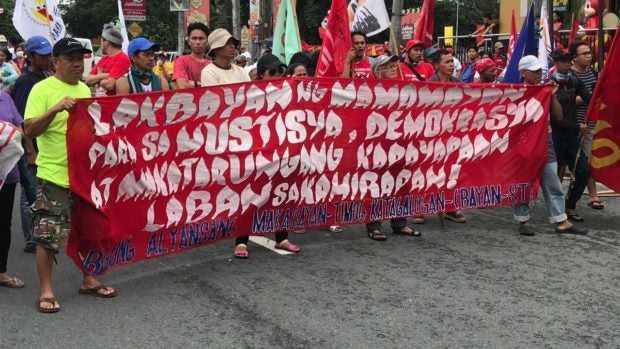 At least 2,700 critics of President Rodrigo Duterte have gathered in different parts of Quezon City as they call for an end to labor contractualization, wage hike, and militarization.

Figures provided by the National Capital Region Police Office (NCRPO) showed that 1,500 protestors gathered at UP Diliman on Monday for the United People’s State of the Nation Address (Sona).

As of 12:00 noon, various militant groups converged at The Oblation Plaza of UP Diliman, They will join the bigger anti-Duterte demonstrations along Commonwealth Avenue later in the day.

UP Diliman’s employees union and student organizations joined the demonstrations in calling for President Duterte’s ouster and the end of martial law in Mindanao.

Members of the Lumad community were also present at the protests in UP Diliman. They came all the way from Mindanao to join the rallies.

Some protestors were also seen selling Mao Zedong-inspired caps at the rallies.

Meanwhile, about 500 members of Kadamay were monitored at Commonwealth Avenue near Eliptical Road.

In Maginhawa, the NCRPO recorded an estimated 450 anti-Duterte rallyists.

A total of 280 protesters also aired their grievances against the Duterte administration in front of Department of Agriculture main office, Quezon City Hall, Tandang Sora, and IBP Road.

Duterte is set to deliver his third Sona around 4 p.m. Monday at the Batasang Pambansa in Quezon City. /kga