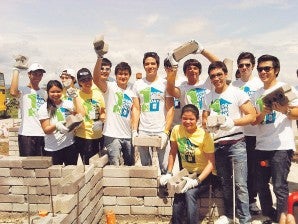 YOUNG volunteers take a breather from building homes for the poor under the “1K for 1 Day” of Habitat for Humanity in Calauan, Laguna. MARICAR P. CINCO/INQUIRER SOUTHERN LUZON

CALAUAN, Laguna— Daisielynne Reyes, 23, had to put down the can of paint she was carrying and take off her work gloves in order to talk. She needed both hands to express her thoughts in sign language.

“She said she remembered doing the same when they had to paint their own home. But it was her first time to paint houses for other people,” said teacher Bea Francisco who interpreted for the hearing-impaired Reyes.

Reyes was one of the 60 students from the School of Deaf Education and Applied Studies of the De La Salle College of St. Benilde that took part yesterday in the “1K for 1 Day,” a project of the Habitat for Humanity Philippines (HFHP) to tap high school and college students in building homes at a government relocation site here.

Reyes’ family had to leave their home in Bulacan and move in with her grandmother in Manila to be closer to school. Her father, who was employed as a security guard, passed away in 2008. The family is being supported by a sister who works in the United States, having been brought there by a restaurant chain that she had started working for in the Philippines.

Reyes misses her old home but is happy about relocating to Manila because at least the family is together.

This was the message that Reyes conveyed to the families who had to relocate from the Estero de Paco in Manila but who will soon be occupying the houses that she and other volunteers had painted yesterday.

“People don’t get everything in life. To be given a new home is an opportunity and (the new house owners) must now be responsible for their homes and their families,” she said.

“1K” stands for the 1,000 targeted youth volunteers but the turnout was overwhelming. There were 1,600 students from international schools and private and public universities and colleges in Manila that volunteered to participate.

“It was a record number of youth volunteers, the largest number in a single day. So much energy and so much excitement,” said Fernando Zobel de Ayala, the Habitat campaign cabinet chair. He said it was the biggest Youth Build they’ve had so far in Asia.

Karen Davila, the ABS-CBN news anchor who is HFHP ambassador and campaign cabinet member, said she felt “good that students from all walks of life were here building homes for our kapwa (fellow) Pinoys! We need to expose our kids to these realities. Not all Filipinos live well or own their own home. They need us.”

Television host Kris Aquino, an HFHP nation-building ambassador, donated one house per month for a year in support of the campaign.

Reyes and her team of “differently abled” volunteers were assigned to paint a row of 90 houses that had already been constructed.

She said they did not feel any different from the other volunteers as everyone was focused on the idea of “building houses for the poor.”

“As we say, it’s the ability, not the disability. They can do just about anything but hear,” Francisco said.

Alex Eduque, the Habitat youth council chair, said the project sent a message to the youth about “the importance of volunteerism, cooperation and teamwork” regardless of who they were or where they came from.

The rest of the volunteers were assigned to another block to build the foundation for 80 houses. They sifted sand, pushed carts of hollow blocks and piled concrete blocks under weather that rapidly changed from a simmering hot morning to a rainy mid-afternoon. Some even danced to the loud music from the speakers as they handed the concrete blocks to their teammates.

“Instead of spending the rest of the summer in the beaches, why not this way? Just the same, you’ll get a tan,” said Diane Gador, a student volunteer from Far Eastern University.

Her schoolmate, Kenn Vargan, said it was both a community service and a workout as they were surely burning fat in the heat.

For Mary Anne Carillo, 25, and her sisters who are spending their two-week vacation in the Philippines, the experience of dirtying their hands as they carried concrete blocks was something to tell their friends when they return to New Jersey.

“I didn’t realize it would be this way, inspiring these youths from different schools and building (homes) for the Filipino people,” said actor and Habitat youth ambassador Matteo Guidicelli.

Panting as he laid out the bricks for a bathroom, Guidicelli said it was the first time he had joined a Youth Build.

HFHP managing director and CEO Ricky Jacinto said the houses that they had started building yesterday could be ready for use in 45 days.

The HFHP has so far built more than 500 homes, each one measuring about 20 square meters and 2.74 meters high, on this site.

Jacinto said the HFHP would next partner with the Department of Education in a future project to build houses for schoolteachers.

He said HFHP has seen how the “power of the youth and their energy can make a difference.”

“It’s never too early or too late for nation-building. It’s time we (adults) learn from them,” Jacinto said.