Democratic socialism surging in the age of Trump 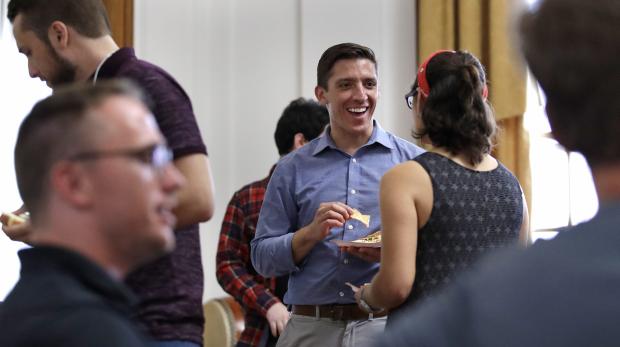 Zak Ringelstein (center) a Democratic candidate for US Senate in Maine, eats a potluck dinner during a gathering prior to a meeting of the Southern Maine Democratic Socialists of America at City Hall in Portland, Maine, Monday, July 16, 2018. On the ground in dozens of states, there is new evidence that democratic socialism is taking hold as a significant force in Democratic politics. (Photo by CHARLES KRUPA / AP)

PORTLAND, Maine — Last Friday, Maine Democrat Zak Ringelstein wasn’t ready to consider himself a formal member of the Democratic Socialists of America, even if he appreciated the organization’s values and endorsement in his bid to become a United States senator.

Three days later, he told The Associated Press that was ready to become the only major-party Senate candidate in the nation to be a dues-paying democratic socialist.

The swift evolution is latest evidence of a nationwide surge in the strength and popularity of an organization that, until recently, operated on the fringes of the liberal movement’s farthest left flank. But as Donald Trump’s presidency stretches into its second year, democratic socialism has become a significant force in Democratic politics. Its rise comes as Democrats debate whether moving too far left will turn off voters.

“I stand with the democratic socialists, and I have decided to become a dues-paying member,” Ringelstein told the AP. “It’s time to do what’s right, even if it’s not easy.”

There are 42 men and women running for offices at the federal, state and local levels this year with the formal endorsement of the Democratic Socialists of America, the organization says. They span 20 states, including Florida, Hawaii, Kansas and Michigan.

The most ambitious Democrats in Washington have been reluctant to embrace the label, even as they embrace the policies defining modern-day democratic socialism: Medicare for all, a $15 minimum wage, free college tuition and the abolition of the federal department of Immigration and Customs Enforcement, also known as ICE.

Her victory poured gasoline onto a fire that was already beginning to burn brighter. The DSA’s paid membership has hovered around 6,000 in recent years, said Allie Cohn, a member of the group’s national political team.

There is little distinction made between the terms “democratic socialism” and “socialism” in the group’s literature. While Ringelstein and other DSA-backed candidates promote a “big-tent” philosophy, the DSA constitution describes their members as socialists who “reject an economic order based on private profit” and “share a vision of a humane social order based on popular control of resources and production, economic planning, equitable distribution, feminism, racial equality and non-oppressive relationships.”

Members during public meetings often refer to each other “comrades,” wear clothing featuring socialist symbols like the rose and promote authors such as Karl Marx.

The common association with the Soviet Union, the first state to adopt a form of socialism, has made it difficult for sympathetic liberals to explain their connection.

“I don’t like the term socialist, because people do associate that with bad things in history,” said Kansas congressional candidate James Thompson, who is endorsed by the DSA and campaigned alongside Sanders and Ocasio-Cortez, but is not a dues-paying democratic socialist. “There’s definitely a lot of their policies that closely align with mine.”

Thompson, an Army veteran turned civil rights attorney, is running again after narrowly losing a special election last year to fill the seat vacated by Secretary of State Mike Pompeo. Even in deep-red Kansas, he embraces policies like “Medicare for all” and is openly critical of capitalism.

In Hawaii, 29-year-old state Rep. Kaniela Ing isn’t shy about promoting his status as a democratic socialist in his bid for Congress. He said he was encouraged to run for higher office by the same activist who recruited Ocasio-Cortez.

“We figured just lean in hard,” Kaniela told the AP of the democratic socialist label. He acknowledged some baby boomers may be scared away, but said the policies democratic socialists promote – like free health care and economic equality – aren’t extreme.

Republicans, meanwhile, are encouraged by the rise of democratic socialism – for a far different reason. They have seized on what they view as a leftward lurch by Democrats they predict will alienate voters this fall and in the 2020 presidential race.

The Republican National Committee eagerly notes that Sanders’ plan to provide free government-sponsored health care for all Americans had no co-sponsors in 2013.

Today, more than one-third of Senate Democrats and two-thirds of House Democrats have signed onto the proposal, which by one estimate could cost taxpayers as much as $32 trillion.

Spokesmen confirmed that none of the senators consider themselves democratic socialists, but made no effort to distance from the movement’s priorities.

Most support the push to abolish ICE, which enforces immigration laws and led the Trump administration’s recent push to separate immigrant families at US-Mexico border.

Of the group, only Booker hasn’t called for ICE to be abolished, replaced or rebuilt. Yet Booker’s office notes that he’s among the few senators backing a plan to guarantee government-backed jobs to unemployed adults in high-unemployment communities across America.

“Half of voters already think the Democratic Party is too extreme, so embracing socialist policies like government-run health care, a guaranteed jobs program and open borders will only make Democrats more out of touch,” RNC Chair Ronna Romney McDaniel said.

Despite Ocasio-Cortez’s recent success, most DSA-endorsed candidates have struggled.

Ringelstein, a 32-year-old political neophyte, is expected to struggle in his campaign to unseat Maine Sen. Angus King, an independent who caucuses with Democrats. He is refusing to accept donations from lobbyists or corporate political action committees, which has made fundraising a grind.

At the end of June, King’s campaign reported $2.4 million cash on hand while Ringelstein had just $23,000.

He has tapped into the party’s national progressive movement and the southern Maine chapter of the DSA for the kind of grassroots support that fueled Ocasio-Cortez’s victory. As he has almost every month this year, Ringelstein attended the group’s monthly meeting at Portland’s city hall last Monday.

She cheered the “comrades” softball team’s recent season before moving into an agenda that touched on climate change legislation, a book share program “to further your socialist education,” and an exchange program that lets community members swap favors such as jewelry repair, pet sitting or cooking.

Near the end of the two-hour gathering, Ringelstein formally thanked the group for “standing shoulder to shoulder with us throughout this entire campaign.”