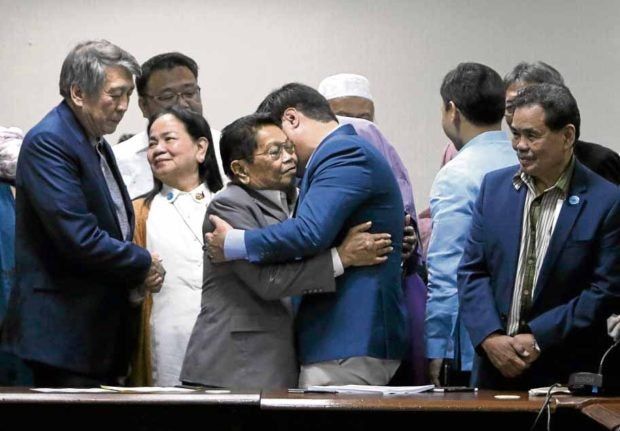 It was 11:05 p.m. on Wednesday and members of the Bangsamoro Transition Commission (BTC) were in tears but widely smiling after the chairs of the Senate-House conference on the proposed Bangsamoro Basic Law (BBL) brought down the gavel, pronouncing the final text of the bill approved.

“I cannot describe my feelings. It is so overwhelming,” Iqbal said.

“It took us more than 20 years to realize our dreams,” he said, referring to the MILF’s long journey to peace and self-determination that culminated on this night with the congressional panel’s approval of the charter of a new Bangsamoro region that would replace the Autonomous Region in Muslim Mindanao (ARMM).

The new region to be established by what is now called Bangsamoro Organic Law (BOL) will be known as Bangsamoro Autonomous Region in Muslim Mindanao (BARMM).

The Senate and the House of Representatives are expected to ratify the proposed BOL at the start of the third regular session of the 17th Congress next Monday.

President Duterte was expected to sign the bill into law after its ratification.

Presidential spokesperson Harry Roque said the proposed BOL may be ratified quickly because Mr. Duterte had certified it urgent.

“It’s possible, because it has been certified urgent. It’s possible that it will be on Monday. I think that’s the target anyway,” Roque said on Thursday.

He thanked the lawmakers and the BTC on behalf of the government and said Mr. Duterte would sign the ratified bill before his address to a joint session of Congress next Monday.

‘A good thing to start with’

Ghadzali Jaafar, chair of the BTC, said on Wednesday night that he was satisfied with the approved bill.

“It’s not the best law but it’s a good thing to start with. We appreciated it very much,” Jaafar said.

He said he was excited about going back to Mindanao to announce the approval of the bill and start plans for the plebiscite.

Critics of the original BBL bill also said they were satisfied with the approved text.

Zamboanga Rep. Celso Lobregat, a member of the House panel in the conference committee, said the lawmakers delivered a bill much better than the proposed BBL.

“You cannot say it’s watered down, but is an improved and an enhanced version, because almost all of the constitutional issues have been addressed,” Lobregat said.

He said the phrase “right to self-determination” was removed from the final text because it was “very clear that the Bangsamoro autonomous region is [an] integral and inseparable part of the Philippines.”

It is clear in the final version that the Bangsamoro people owe their allegiance to the Philippine government and to the constitutional bodies, he said.

Presidential Adviser on the Peace Process Jesus Dureza on Thursday described the approval of the proposed Bangsamoro charter as the “beginning of more work to bring sustainable peace [in Mindanao].”

Dureza’s office said the BARMM would receive a special development fund of P50 billion over 10 years after establishment for the rehabilitation of parts of the region ravaged by decades of conflict.

Senate Majority Leader Juan Miguel Zubiri, who headed the Senate panel in the conference, said the bill would give BARMM enough resources and powers to chart its own path.

House Majority Leader Rodolfo Fariñas, head of the House conference panel, appealed to the future leaders of BARMM “to make the best use of this opportunity given to them.”

“We are appealing to you, we did everything, almost everything, that you wanted. We’re handing it to you. You owe it to yourselves, to your sacrifices, to the people of Mindanao,” he said. —WITH A REPORT FROM BONG S. SARMIENTO