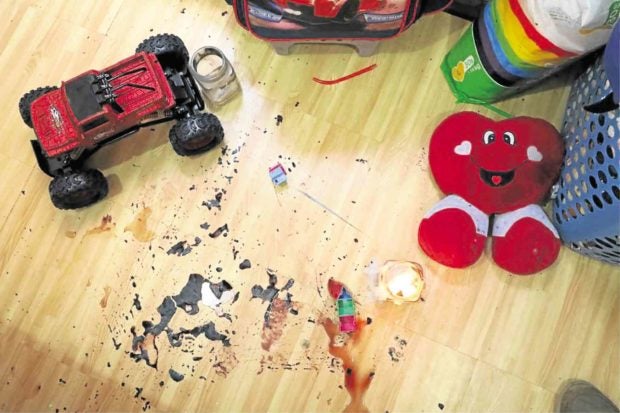 TRAGEDY AT HOME Skyler’s room on the day a stray bullet killed the 4-year-old boy shows bloodstains still fresh and some of his toys scattered. —TONEE DESPOJO/CEBU DAILY NEWS

CEBU CITY — If it takes a village to raise a child, Barangay Ermita here had done its job for 4-year-old Bladen Skyler Abatayo, who was killed by a stray bullet during an antidrug operation by police on July 10.

A resident of the village, who asked that he not be named for fear of retaliation, made sure the community will always have Skyler around through a 3 x 5-meter mural on a seawall with the boy’s image.

The resident painted Skyler as an angel with a pair of wings shedding tears for the boy’s senseless death.

The painter said he still could not believe Skyler is gone.

He said Skyler had been close to him and he even painted an image of Jesus and the boy’s pet dog in Skyler’s room upon the request of the boy’s father, Marc Anthony.

Another resident of Ermita, Kathleen, said the mural eased villagers’ longing for Skyler.

She recalled the boy dropping by her place after coming home from school.

Skyler was a nursery pupil at a university in downtown Cebu City and was doing his homework—practicing to write his name—inside his room when he was hit by the stray bullet.

Skyler, according to Kathleen, was treated like their own child by residents of Ermita.

Since the boy’s death, residents had shown grief in different ways and demanded justice.

Around 2 a.m. on July 11, security footage showed residents turned off lights in their homes and lit the side of the road leading to Skyler’s wake when the casket bearing the boy’s body arrived for the wake.

On the first day of Skyler’s wake, residents launched a signature campaign urging the Commission on Human Rights (CHR) to investigate the four policemen involved in the antidrug operation that led to Skyler’s death.

The CHR heeded the appeal on the same day.

At the wake relatives prepare meals for visitors. One meal was arroz caldo, or porridge, and another was larang, a local fish dish.

Residents volunteered to stay at the wake in place of Skyler’s parents who were busy going to government offices in search for justice for Skyler.

Neighbors take turns attending to Kylee, the 2-year-old sister of Skyler, while the children’s parents were busy with documents needed by authorities for the investigation. 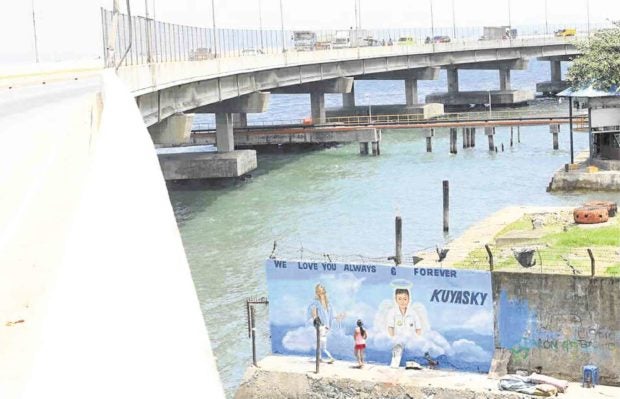 REMEMBERING SKYLER A mural showing Skyler as an angel rises in the village of Ermita, the boy’s neighborhood in Cebu City. LITO TECSON/CEBU DAILY NEWS

“We are always ready to help the family in whatever way we can,” said Kathleen. “He was a good child, a very sweet one for all of us here,” she said.

Kathleen added that while residents fear for their lives, too, they were willing to cooperate with the investigation.

The National Bureau of Investigation in Central Visayas has started a separate probe and already interviewed residents who were present during the antidrug operation.

An NBI forensic team from Manila reenacted events that led to Skyler’s death.

The wake has had its share of prominent visitors, like Mayor Tomas Osmeña and wife, Margarita, who had talked with the Abatayo family and handed over P10,000 in financial aid.

“They are all welcome here,” said Marc Anthony. “It is for everyone to see that my innocent child has died senselessly,” he said.

He said he was grateful for the support which helped the family survive the pain of losing Skyler.

“I cannot forget the pain brought by the fact that my child is now gone, but their thoughts and help enlightened my family that somehow, God has a purpose why he took Sky too early,” Marc Anthony said.

He, however, said he was uncertain if the family could let go of Skyler when he is buried on July 21.