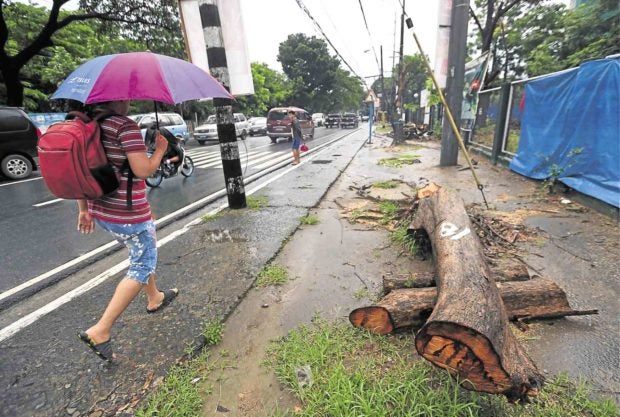 “ROAD KILL” Only 62 of the hundreds of trees along Lawton Avenue are expected to be earth-balled and transplanted.—LYN RILLON

Its green cover shrinking each year, Metro Manila will again be losing trees en masse for the sake of urban convenience.

Around 500 sidewalk trees are being removed to give way to a road-widening project in Taguig City’s commercial district, with the approval of the Department of Environmental and Natural Resources (DENR).

The BCDA was in turn ordered to plant 21,250 seedlings of hardened indigenous trees as replacement.

The order did not specify where the new trees are to be planted, but it also required the agency to maintain and protect the transplanted trees for at least one year.

BCDA shall also replace each transplanted tree that will not survive after six months with 100 seedlings of indigenous tree species, in compliance with DENR Memorandum Order No. 2012-02.
DENR-NCR’s Conservation and Development Division confirmed on Wednesday that the replacement seedlings were ready as early as three weeks ago.

The trees are being removed to give way to Phase 2 of the widening of Lawton Avenue (which connects Fort Bonifacio and Villamor Air Base), project under the Department of Public Works and Highways (DPWH).

A Tarlac-based construction company, Northern Builders, got the P407-million contract to do the electrical and road works component of the project, including the removal of trees.

According to DPWH, the widening project is expected to be completed next year and will reduce by 40 percent the travel time between Bonifacio Global City (BGC) and Ninoy Aquino International Airport.

It is also expected to decongest major arteries such as Edsa, Osmeña Boulevard and C-5 Road.

It also complements the BGC-Ortigas Center Link Road project which will improve access to and from the cities of Taguig, Pasig, Makati and Mandaluyong.

But such promises of smoother travel could not appease a concerned citizen who recently posted photos of the freshly cut or pruned trees online.

“Some of these big, precious trees are already decades old. Instead of cutting them down, we should dig them up and move them, because that is the right way to do it,” he said, noting that the species being cut included hardwoods such as such as narra, molave, mahogany and gmelina.

Some of the mahogany trees set to be cut down are already as tall as 15 meters and with trunks that are about 50 centimeters in diameter. It takes about 25 years for a mahogany tree to reach that mature height.

Based on the DENR permit, only 62 trees—the youngest and smallest of the lot—will be transplanted.

“Trees need not to be cut down to give way to development,” said the concerned citizen, a regular commuter on Lawton Avenue. “The wrong things we are doing to Mother Nature will come back to us in the form of floods, pollution and stronger typhoons. When will we Filipinos learn?”—With a report from ROSELIE MARI VILLAFLOR