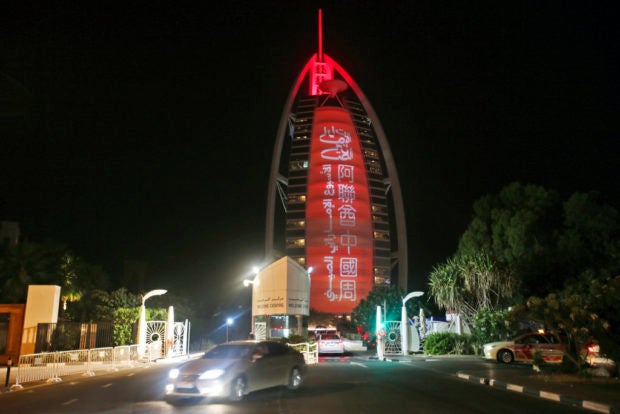 In this  July 18, 2018 photo, a sign reading “UAE Chinese Week” in Chinese and Arabic is projected onto the Bus Al Arab luxury hotel to celebrate the UAE Chinese Week in Dubai, United Arab Emirates. AP

It is Xi’s first trip abroad since he was appointed to a second five-year term as president in March when he made a historic power grab by moving to abolish presidential term limits, allowing him to rule for as long as he wants. The visit also comes as China pushes to expand its influence in a region where it sources much of its energy needs.

China and the UAE conduct some $50 billion in annual trade and ahead of the trip, the UAE’s ambassador to China said the country hopes that will double over the next decade.

The UAE, home to oil-rich Abu Dhabi and the skyscraper skylines of Dubai, also hosts some 200,000 Chinese expatriate workers, according to Emirati government statistics. In recent years, the UAE has focused on boosting Chinese tourism to its seven-sheikhdom federation.

Some 1 million Chinese tourists visited in 2017, boosted by the UAE offering visas on arrival. Long-haul carriers Emirates and Etihad provide a crucial airlink between East and West.

China’s state-run CNPC oil company has also bought interests in both onshore and offshore oil concessions in the UAE.

“Our relationship with China is a long-term strategic one that encompasses a multitude of aspects; political, economic, cultural, social, tourism, among others,” UAE Minister of State Sultan Ahmed Al Jaber said in a statement. “The UAE-China relationship is rooted in the principles of mutual respect, constructive dialogue and meaningful cooperation to achieve their common interests in a variety of sectors.”
Ahead of Xi’s arrival, the country kicked off an official “UAE-China Week” featuring cultural events and entertainment, which officials say they plan on making an annual event.

Developer Emaar also announced plans for what it said would be the biggest Chinatown in the Mideast: a development of 6 square kilometers (2.3 square miles) that will be located 10 minutes from the Dubai International Airport.

Construction is also a big-ticket market for Chinese firms. In Dubai especially, its massive Sheikh Zayed Road has seen a number of quickly built Chinese overpasses spring up over its dozen lanes. Chinese-built high-rises also have become increasingly common.

The state-run China State Construction Engineering Corp. also has contracts with private interests as well. Most noticeably, it won a $19.6 million contract in June for “major road and infrastructure work” at a development by DAMAC Properties that will surround Dubai’s second Trump golf course. It earlier won a $130 million contract to build apartment towers near the first Trump golf course, which President Donald Trump’s sons Donald Jr. and Eric opened in February 2017.

Trump’s ties to DAMAC’s owner, billionaire businessman Hussain Sajwani, have raised ethics and security questions as the American president did not divest himself from his eponymous development company when taking office. However, the Trump Organization has said it won’t make new foreign deals while its namesake is president.

China has expanded its influence among Arab states both for economic purposes and to counter the influence of Washington and Europe. The Middle East is also a key node in China’s “Belt and Road” initiative that envisages linking Beijing to other parts of Asia, Europe and Africa via a network of ports, railways, economic development zones and power plants.

While in the UAE, Xi plans talks officials on the Belt and Road project, as well as many other issues, including energy, agriculture, finance and scientific research, China’s official Xinhua News Agency reported.