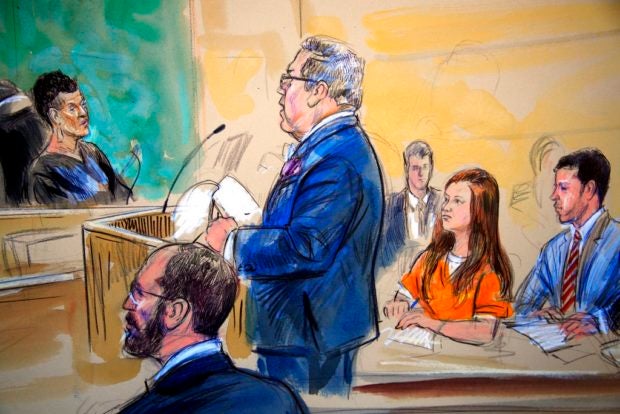 This courtroom sketch depicts Maria Butina, in orange suit, a 29-year-old gun-rights activist suspected of being a covert Russian agent, listening to her attorney Robert Driscoll, standing, as he speaks to Judge Deborah Robinson, left, during a hearing in federal court in Washington, Wednesday, July 18, 2018. Assistant U.S. Attorney Erik Kenerson, bottom left, and co-defense attorney’s Alfred Carry, right, listen. Prosecutors say Butina was likely in contact with Kremlin operatives while living in the United States. And prosecutors also are accusing her of using sex and deception to forge influential connections. (Dana Verkouteren via AP)

WASHINGTON — A 29-year-old gun-rights activist suspected of being a covert Russian agent was likely in contact with Kremlin operatives while living in the United States, prosecutors said Wednesday, accusing her of using sex and deception to forge influential connections.

The woman, Maria Butina, was photographed by the FBI dining privately with a Russian diplomat suspected of being an intelligence operative in the weeks before the envoy’s departure from the United States last March, prosecutors said. She also had contact information for people who investigators believe were employees of Russia’s Federal Security Services, or FSB, the successor intelligence agency to the KGB.

The allegations add to the portrait of a Russian woman who the Justice Department said worked covertly to establish back-channel lines of communication to the Kremlin and infiltrate U.S. political organizations, including the National Rifle Association (NRA), and gather intelligence for a senior Russian official to whom she reported.

Prosecutors also alleged she had a personal relationship with an American political operative and offered sex to another person in exchange for a position with a special interest organization.

Court papers do not name the individuals or the special interest group.

Butina awaits trial on charges of conspiracy and acting as an unregistered foreign agent for Russia. She pleaded not guilty during Wednesday’s hearing in which U.S. Magistrate Deborah Robinson ordered her held in jail as the case moves forward, saying she was a flight risk.

After the hearing, Butina’s attorney, Robert Driscoll, told reporters his client respected but strongly disagreed with the judge’s decision.

“She’s been aware of a criminal investigation into her conduct for months and made no attempt to flee,” Driscoll said, saying Butina was not a Russian agent but rather a “young student seeking to make her way in America.”

Citing her intelligence ties, the government had argued that Butina’s legal status in the United States was based on “deception,” saying her student visa and enrollment at American University were a cover for her covert work. They also argued she posed an “extreme” risk of fleeing the United States.

Butina was arrested over the weekend amid signs that she planned to leave Washington area and possibly the country, prosecutors said. Her lease on an apartment ends later this month, her belongings were packed at the time of her arrest and she had applied for a visa that would allow her to travel to and from the United States, prosecutors also said.

Her personal ties, “save for those U.S. persons she attempted to exploit and influence,” were to Russia, according to the government court filing.

“She has every incentive to flee,” Assistant U.S. Attorney Erik Kenerson said during the hearing,

The government was particularly concerned Butina would attempt to leave the United States using Russian diplomatic facilities or vehicles, Kenerson said, noting that American authorities would be powerless to stop her due to immunity protections. The United States has no extradition treaty with Russia, Kenerson added. 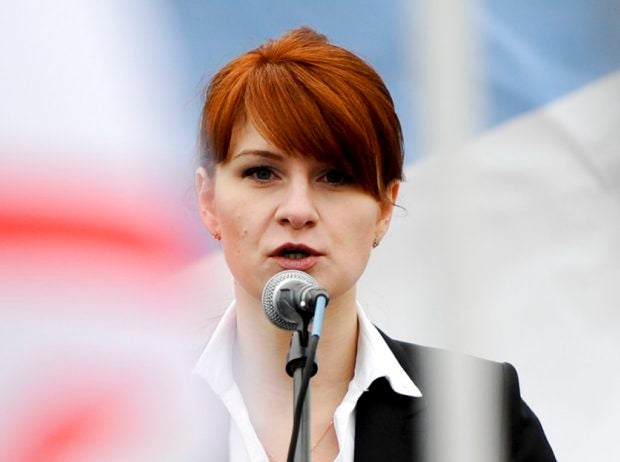 In this photo taken on Sunday, April 21, 2013, Maria Butina, leader of a pro-gun organization in Russia, speaks to a crowd during a rally in support of legalizing the possession of handguns in Moscow, Russia. Butina, a 29-year-old gun-rights activist, served as a covert Russian agent while living in Washington, gathering intelligence on American officials and political organizations and working to establish back-channel lines of communications for the Kremlin, federal prosecutors charged Monday, July 16, 2018. (AP Photo)

During the hearing, prosecutors showed a photo of Butina having dinner with a man they said was suspected of having ties to Russian intelligence. They also read from notes found in her home that included reference to a potential job offer from the FSB and noted she had been photographed with Russian diplomatic personnel, including Sergey Kislyak, Russia’s former ambassador to the United States.

Prosecutors said Butina was also regarded as a covert agent by a Russian official with whom she was in touch, with text messages discovered by the FBI showing how the official likened her to Anna Chapman, a Russian woman who was arrested in 2010 and then deported as part of a prisoner swap.

In March 2017, following news coverage of Butina, the Russian official wrote: “Are your admirers asking for your autographs yet? You have upstaged Anna Chapman. She poses with toy pistols, while you are being published with real ones,” according to the court filing.

Butina and the official messaged each other directly on Twitter, prosecutors said. One such exchange occurred a month before the U.S. presidential election, when Butina said she understood that “everything has to be quiet and careful.”

They also spoke on January 20, 2017, when Butina sent the official a photo of herself near the U.S. Capitol on the day Donald Trump was inaugurated president. According to court papers, the Russian official responded: “You’re a daredevil girl! What can I say!” Butina responded, “Good teachers!”

Authorities have not named the Russian official, but during Wednesday’s hearing, Driscoll said it is Alexander Torshin, a former legislator who is now a senior official in the Central Bank of the Russian Federation.

Torshin, who became an NRA life member in 2012, was among a group of Russian oligarchs and officials targeted in April by Treasury Department sanctions for their associations with Russian President Vladimir Putin and their roles in “advancing Russia’s malign activities.”

During the hearing, Driscoll said Butina was “famous” in Russia for her gun-rights work before coming to the United States and developed legitimate relationships with the NRA through that advocacy and Torshin, whom he described as a mentor. The NRA has not commented on the charges against Butina.

Driscoll also dismissed the case against her as “minor” and said prosecutors were wrong to think she would flee the country now. Butina cooperated with the Senate intelligence committee, faced a barrage of media coverage and endured a search warrant months ago without attempting to leave the United States, he said.

He also disclosed that Butina had offered to assist the government in an unrelated fraud investigation, led by the U.S. Attorney’s office in South Dakota, into her boyfriend, who is identified as “U.S. Person 1” in court papers.

Prosecutors confirmed the investigation in court, but provided no further details other than to say it was unrelated to Butina’s charges in Washington.

Prosecutors have alleged that she used her relationship with the unnamed American political operative, with whom she was living, “as simply a necessary aspect” of her covert activities on behalf of Russia.

Authorities said the relationship with the operative shouldn’t be seen as a “strong tie” to the United States, noting she “offered an individual other than U.S. Person 1 sex in exchange for a position within a special interest organization.”   /kga