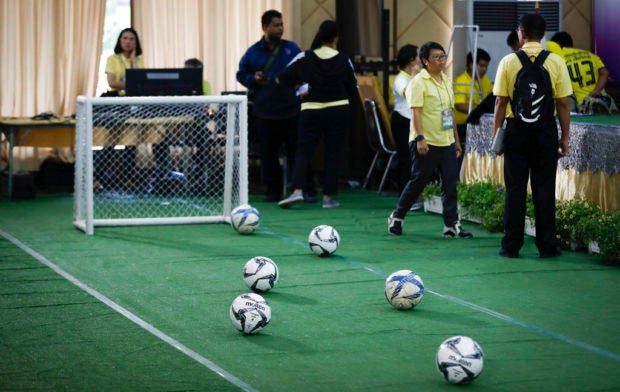 A mini soccer field being set up before a press conference on the 12 boys and coach realize from the hospital in Chiang Rai province, northern Thailand on July 18, 2018. AP

CHIANG RAI, Thailand —  Members of a Thai youth soccer team who were trapped in a cave have left the hospital where they have been treated since their rescue, and are slated to hold a news conference before they return to their homes.

The 12 boys and their 25-year-old coach had been pronounced generally healthy by doctors, aside from some minor infections.

The news conference, to be held in a government building, will be the first opportunity the members of the team have to speak directly to the media, though video of them was released previously. Officials are reviewing questions in advance to make certain none might cause damaging psychological effects.

The youth soccer teammates rescued from a flooded cave in Thailand are expected to speak about their ordeal.

A news conference with the 12 boys and their coach was being arranged for the evening in the northern city of Chiang Rai, where the boys have been recovering in a hospital since last week.

The group entered the Tham Luang cave on June 23 but was soon trapped by flooding. Divers found them 10 days later and rescuers eventually extracted them over three days, concluding July 10.