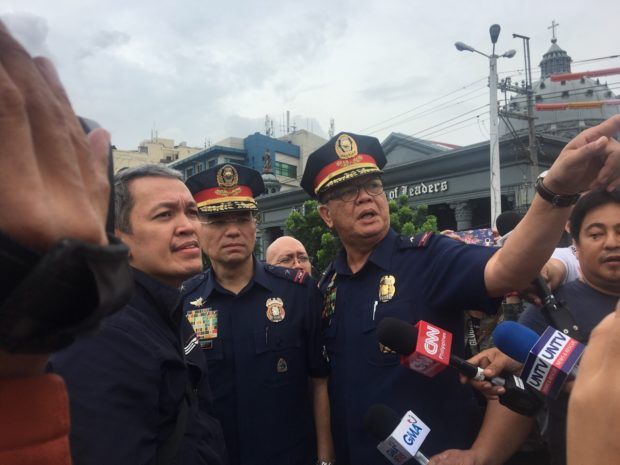 The Quezon City Police District (QCPD) advised the public on Wednesday to just stay at home if they have no important matters to go about on the day President Rodrigo Duterte will deliver his third State of the Nation Address (Sona) at the House of Representatives.

The QCPD, however, assured all the workers who will go out to work on the day of Sona that security measures and traffic management will be fully implemented for the workers’ safety and convenience as traffic flow is expected to be heavy due to street demonstrations.

(For those who reside in Quezon City, if you do not have any important appointment, better yet stay at home. But for those who will go out and work, of course they need to work, just continue working, we are already addressing traffic control.)

(That’s also what the protesters want, not to affect the flow of traffic while they still exercise their right to express and freedom of speech.)

Around 2 p.m. of July 23, the stretch of the highway’s north-bound lanes starting from Home Depot to Lido Restaurant will be closed to motorists to accommodate approximately 20,000 demonstrators.

Esquivel said QCPD officers will prepare for the road closure on Monday midnight and will fully block the lanes once the protesters begin their march around 2 p.m.

The QCPD has advised the public to take alternate routes to avoid being stuck in traffic along Commonwealth leading to the House of Representatives.

For motorists from Quezon Memorial Circle going to Batasan Complex:

– Right turn to IBP Road east-bound lane going to the House of Representatives;

– Take the zipper lane from the opposite direction of IBP Road corner Filinvest 1;

– Left turn to House of Representatives using the South gate.

For motorists from Quezon Memorial Circle going to Fairview:

– From the elliptical road, turn right to North Avenue then turn to Mindanao Avenue; or

– Continue straight toward Old Sauyo Road then turn left to Regalado Avenue or Chestnut Street going Fairlane then to place of destination via Commonwealth Avenue.

For motorists from Fairview going to Quezon Memorial Circle:

– Turn left to Mindanao Avenue then to place of destination via North or Visayas Avenue.