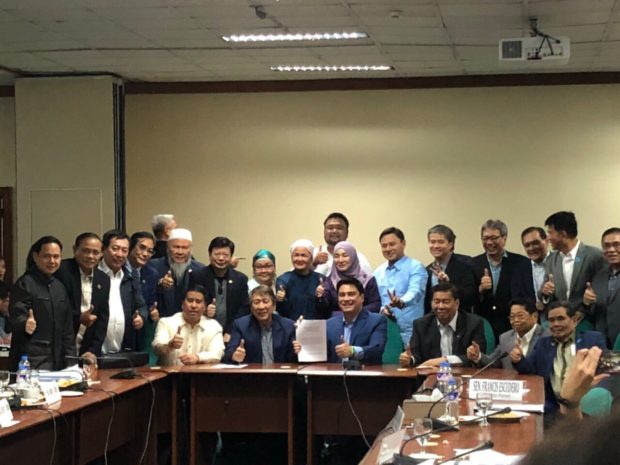 Members of congressional bicameral conference committee pose for a photo after the approval of the BBL at Senate on July 18, 2018. PHOTO by Maila Ager/INQUIRER.net 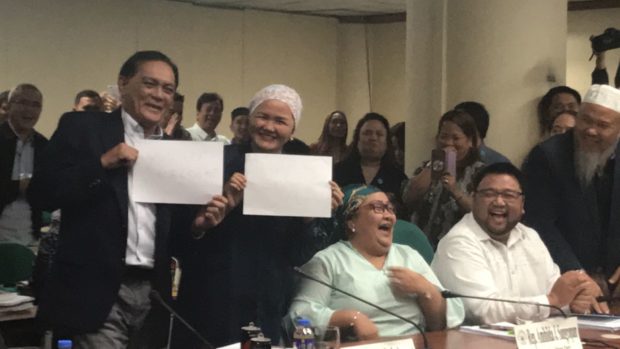 After six days of past-midnight debates and several debacles, the 28-member bicameral conference committee approved on Wednesday night the reconciled version of the Bangsamoro Basic Law (BBL), which was renamed the Organic Law for the Bangsamoro Autonomous Region in Muslim Mindanao (BARMM) or the Bangsamoro Organic Law.

“I am just overwhelmed and emotional and I just want to thank everyone for their time and efforts,” Zubiri, a lawmaker from Mindanao, said moments before the approval of the final version of the bill.

“We are here in recognition of the aspirations of the Bangsamoro people and the other inhabitants of the Muslim Mindanao,” Fariñas said. “We have done a very important legacy.”

The debates started on July 9, but deliberations of the law’s 18 articles were suspended past midnight last July 13. The panel resumed its meeting on Tuesday to finally review all provisions of the bill that would create a new political entity in Mindanao to replace the current ARMM.

But some last-minute issues raised by the Bangsamoro Transition Commission (BTC) delayed the panel’s original target of approving the landmark measure on Tuesday.

Zubiri said they would forward the proposed measure to President Rodrigo Duterte for review.

If the President approves it, both chambers of Congress would have it ratified in plenary when they convene for their third regular session at 10 a.m. on July 23, so President Duterte can sign it into law before his State of the Nation Address (Sona) at 4:00 p.m.

Zubiri said he hopes the law would then be ratified through a plebiscite in November 2018, which will be followed by the President’s appointment of the members of the Bangsamoro Transition Authority by December 2018 or January 2019.

Zubiri said if the law “hypothetically” loses in the plebiscite, the current ARMM government stays. However, he hopes this would not happen, as the BBL is the “best legislation” that could be given to the ARMM, and that could “address their poverty, lack of educational support, lack of fiscal autonomy, and poor management,” among others.

“This is the day the God has made for all of us, especially for Mindanao. Although it is a rainy day, it is sunny in Mindanao, and we look at it as a sign that finally, we will be able to end this long-drawn problem of conflict in the island of Mindanao,” Zubiri told reporters at the sidelines of Tuesday’s bicameral panel debates at the Ortigas Center in Mandaluyong City.

“Hopefully with this law, peace will reign for a long, long period of time, for our children and our children’s children,” he added.

Anak Mindanao Rep. Amihilda Sangcopan recounted how they had fought hard to have the bill passed, especially for Moro legislators like them “who bore the moral obligations in this august chambers, more so, our forebears who sought in every arena possible to push for a peaceful and just resolution to almost half a century of struggle for self-determination.”

Sangcopan said they have done everything they can to make sure that whatever the final form the BBL takes, “Moros will have something better than the status quo that is the Autonomous Region in Muslim Mindanao (ARMM).”

While many are saying that the BBL now is a watered down version, Sangcopan said they “believe that the fight for a BBL that serves the needs of the Bangsamoro is far from over.”

“We need to take the BBL and, with it as a framework, build the real autonomy we need… Beyond past legislations we have just finished, the real work of self-governance now face us, as we strive to the next level of challenges as one people, as one Bangsamoro, and as Filipinos,” she said in a statement moments after the signing of the bill.

“We do not say that the BBL is the solution, but we had hopes that this will be one of the most important instruments to begin pursuing our long aspirations of just and lasting peace,” she added.

The lawmaker also addressed employees of the current ARMM, saying: “We have fought hard to keep our promise and know that we have also fought to ensure that you will get what is due you as government workers who daily put in the time and effort to push for peace and development in the Bangsamoro.”

READ: 6,000 permanent ARMM employees will be retrenched due to BBL, group says

A copy of the harmonized bill is yet to be given to the media. Please refresh this page for updates. /ee /muf