(Editor’s Note: President Rodrigo Duterte will deliver his third State of the Nation Address [Sona] on July 23. The Inquirer looks back at promises he made in Sona 2016 and Sona 2017, and how he and his administration performed on those promises. We will also look at major issues that marked his two years in office in our #Sona2018 series.)

He appeared at 493 events from July 1 last year to June 30, according to data from the website of Presidential Broadcast Staff Radio-Television Malacañang.

During his first year in office, the 73-year-old President attended 753 events.

He took more weekends off in his second year, spending 22 weekends without a public engagement, compared with 14 during his first year.

He had no public events during all weekends of August last year and February.

The President also traveled abroad less frequently, from 21, including two stopovers, during his first year, to only eight in his second year.

Inquirer Research estimates his journeys at 37,307 kilometers during his second year, a great rollback from 124,067 km during his first year.

The President, however, did not become less controversial.

Callamard had repeatedly expressed concern over the thousands of killings in the President’s take-no-prisoners war on drugs.

Bensouda announced in February that she had begun a preliminary examination of a complaint for crimes against humanity filed against Mr. Duterte and more than 10 of his officials over the killings.

Last month, the President drew widespread criticism for soliciting a kiss from a married Filipino woman during a gathering of Filipino expatriate workers in South Korea.

The incident was followed by a worse mistake — calling God “stupid,” which sparked outrage throughout Christian-majority Philippines.

According to Carmel Abao, assistant professor of political science at Ateneo de Manila University, the President, who is notorious for his colorful language, is asserting his persona and individuality at the expense of the presidency.

The President, she said, is supposed to embody the presidency, a public institution that adheres to standards guided by the Constitution.

With only four working weekends during his second year in office, the President, unlike the controversies beclouding his administration, had been able to rest.

In November, the President had to go home in Davao to rest after a week chock-full of events, including the Asia-Pacific Economic Cooperation forum in Vietnam, Association of Southeast Asian Nations (Asean) summit, and hosting Chinese Premier Li Keqiang in Malacañang.

In a news conference after the Asean summit, the President complained about “a shortage of sleep.”

He also spoke candidly about being exhausted after the summit meetings.

The President is known to have back problems and migraines due to nerve damage after a motorcycle accident.

He has said he suffers from Barrett’s esophagus, which affects his throat, as well as Buerger’s disease, which can cause arterial blockage. —With reports Isabel Cañaveral, Celine Dioticio and Chlarine Gianan 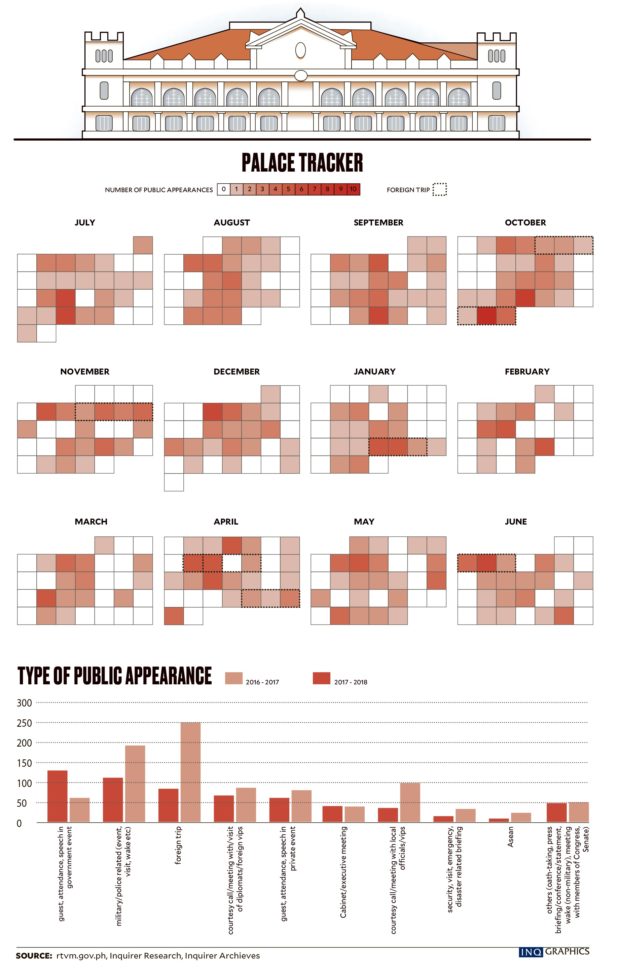