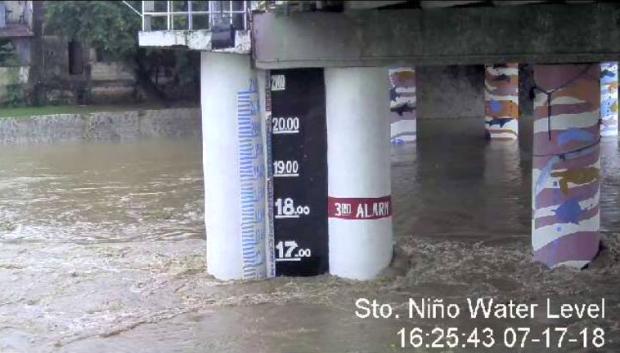 The Marikina City government raised a second alarm as the Marikina River reached a level of 16.0 meters by 4:14 p.m. (Photo from the Facebook page of Marikina Public Information Office)

As of Tuesday afternoon, more than 300 people have already been evacuated in Marikina as flooding continues to pose a threat to residents of the city.

According to the Joint Quick Response Team (JQRT) of the Metropolitan Manila Development Authority (MMDA), a total of 55 families or 308 individuals were affected by flooding caused by rise of the Marikina River.

About four families, or 30 individuals, also sought shelter at the Malanday Elementary School, while a family of three moved to the Concepcion Integrated School.

The JQRT also monitored flooded areas in the area of Narra and Sitaw streets in Barangay Malanday, where flooding had risen to 2 feet.

The Marikina City government raised a second alarm as the Marikina River reached a level of 16.0 meters.

Forced evacuation will only be declared once the third alarm is raised and the water level reaches 18.0 meters. /atm