Two in three Filipinos or 67 percent were against current moves to change the 1987 Constitution, a Pulse Asia survey released Monday showed.

Of the 67 percent, 37 percent disapproved changing the Constitution now and in the future while 30 percent were not up for it at present but may be open for Charter change in the future, the survey noted. 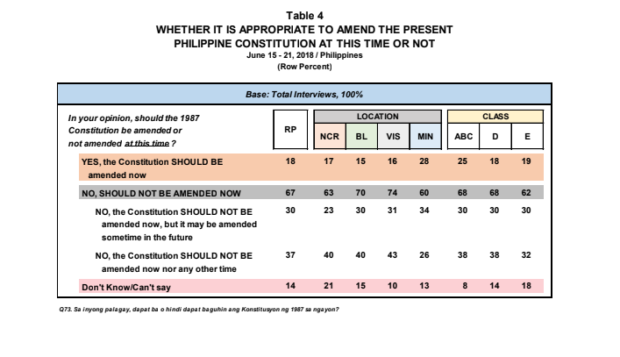 In the same survey, 62 percent said they were not in favor of federalism while 28 percent were in favor.

The survey done among 1, 8000 respondents nationwide was conducted two weeks before the Consultative Committee – tasked to review the 1987 Constitution and draw a new Charter – submitted its final draft proposal for a federal constitution to President Rodrigo Duterte. /kga