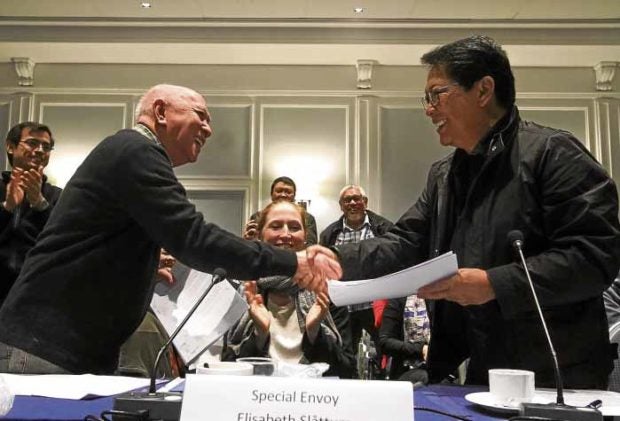 PEACE PROCESS President Duterte’s chief negotiator, Labor Secretary Silvestre Bello III (right), and the head of the National Democratic Front of the Philippine’s peace panel, Fidel Agcaoili, seal with a handshake the supplemental guidelines to facilitate the processing of human rights complaints during the third round of talks in January last year. —KARLOS MANLUPIG

[Editor’s Note: President Rodrigo Duterte will deliver his third State of the Nation Address (Sona) on July 23. The Inquirer looks back at promises he made in Sona 2016 and Sona 2017, and how he and his administration performed on those promises. We will also look at major issues that marked his two years in office in our #Sona2018 series.]

Like a stormy romance, peace talks between the government and communist insurgents have always careened off the path to church.

Peace in the negotiations has always depended on President Rodrigo Duterte’s mood, although supporters of the effort to put an end to the insurgency that’s been going on for half a century have not given up on their belief that his current mood will eventually swing back toward resumption of the talks.

Calling for a ceasefire is acceptable to the communists, but demanding it comes off differently for them, she said.

“If there is a demand, especially if you talk about a permanent ceasefire, for them it’s like asking them to surrender,” Tañada explained, adding that the government should be careful about terminology in talking with the communists.

The conditions set by the President for the resumption of talks “are very difficult,” Tañada said.

Besides a ceasefire during which guerrillas from the New People’s Army (NPA), the CPP’s armed wing, will be confined to camp, the President also wants the talks to be held in the Philippines.

The President also wants the insurgents to drop their demand that they share power with the government and a stop to the NPA’s enforcement of “revolutionary taxes.”

With the negotiations heading nowhere, the government, supported by some lawmakers, has started talking about “localized peace talks,” that is, local governments negotiating peace with the different NPA commands.

Tañada said the NDFP would surely thumb down the local peace talks.

But local public dialogues might work and lead to communities declaring their areas peace zones, she said.

With peace zones, she said, communities could ask both the government and the NPA not to bring their conflict to their areas.

Tañada pointed to confusing turns in the peace effort between the Duterte administration and the NDFP.

After NPA attacks, the President ordered the termination of negotiations on Nov. 23 last year.

The administration also asked a local court to declare the CPP and the NPA terrorist organizations for good measure.

But back-channel talks went on, keeping hopes for a resumption of the negotiations alive.

The United States and the European Union already list the NPA as a terrorist organization.

Tañada said lifting the terrorist tag as well as revoking the President’s termination of the negotiations might spur the resumption of the talks.

Tañada said both sides were close to signing agreements that could lead to a ceasefire when the talks collapsed last year.

“So there’s a possibility [of resuming the talks],” she said.

“Things keep changing,” she added. “A miracle could happen.”