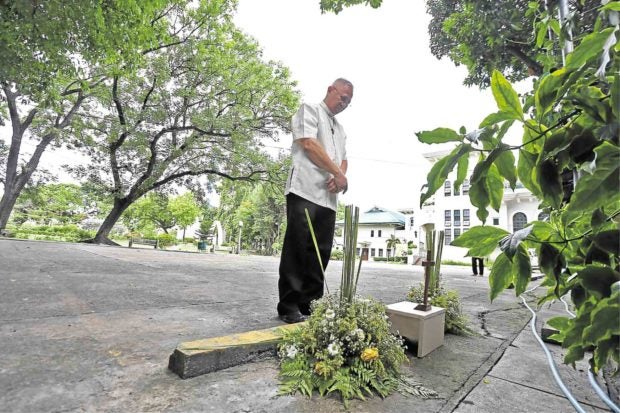 Cebu Archbishop Jose Palma prays at the site where an armed man, Jeffrey Canada, was earlier gunned down at the Archbishop’s Residence after he had searched for Palma and ignored a police warning. —JUNJIE MENDOZA/CEBU DAILY NEWS

CEBU CITY — Cebu Archbishop Jose Palma issued what could be his strongest statement so far against the spate of killings gripping the province of Cebu and the rest of the country, saying it showed that “the culture of impunity reigns.”

Palma appealed for an end to the bloodshed as bodies piled up on the streets and deaths hounded people even in their homes.

Palma, 68 and shepherd of the largest archdiocese in the Philippines with at least 4 million followers and 600 priests, called on people to wake up and fight what he said was a culture of violence that is gripping the country.

“We’re not happy with these deaths. We feel sad,” Palma said in an interview.

“It has reached a level wherein respect for human life is lost, while the culture of impunity reigns,” he said.

“Whoever is doing it, either connected to the illegal drugs trade or for whatever reason, they should know that no one (except God) has the right to take someone else’s life,” Palma said.

“We know that this is not the Christian way,” he added.

Palma said the Church grieves with families of victims of killings.

“We have a lot of questions with few answers about these killings which we could not justify nor understand,” he said.

On July 16, Monday, the Feast of the Our Lady of Mt. Carmel, Catholic Church leaders urged the entire nation to spend a day in prayer and penance to invoke God’s mercy and justice on “those who have blasphemed God’s Holy Name, those who slander and bear false witness and those who commit murder or justify murder as a means for fighting criminality in our country.”

The next three days, July 17 to 19, will be spent for “fasting, praying and alms giving.”

“Our battle is not so much against human beings,” Palma said.

“It is a struggle against evil. We believe in the power of prayer and fasting,” he added.

Based on records of Cebu’s law enforcement units, at least 195 people in the region, mostly in Cebu, were killed in supposed gunfights with police and agents of the Philippine Drug Enforcement Agency (PDEA) and National Bureau of Investigation in Central Visayas since President Duterte launched his bloody war on drugs in July 2016, after assuming office.

At least 215 others were gunned down by still unknown assailants in the region, all in a span of two years.

On Tuesday alone, five people, including a 4-year-old boy, were killed in separate shootings in Cebu City.

One of the dead was a troubled man who wanted to talk to Palma at the Archbishop’s Residence compound in Cebu City but was killed by police when he allegedly opened fire.

Lawyer Jose Glenn Capanas, president of the Integrated Bar of the Philippines’ (IBP) Cebu City Chapter, said the series of killings had instilled fear not just among ordinary citizens but also among local officials who now feared for their safety.

He told Cebu Daily News (sister publication of Inquirer) that law enforcers should be “more visible as deterrent” to crimes and “ensure that, at all times, the rule of law prevails” in pursuit of suspects.

In a separate statement, lawyer Mundlyn Misal-Martin said even lawyers feared for their safety after the killings of members of the IBP.

“These killings have stolen our liberty to live normally,” she said.

“Our worries had sapped our energy and would eventually kill our desire to practice the profession,” she added.

“The angels of death do not come normally for us. There are no angels but mercenaries of men,” Martin said.

On Feb. 19, lawyer Jonnah John Ungab, counsel for confessed drug lord Rolando “Kerwin” Espinosa Jr., was gunned down by an unidentified assailant while driving his car outside the Cebu City Hall of Justice.

Early this month, criminal lawyer Salvador Solima was killed by gunmen who broke into his house. His wife, Verose, was wounded in the attack.

“This new norm must be stopped for the sake of this country and for the future of this generation,” said Martin.

Lawyer Arvin Odron, head of the Commission on Human Rights (CHR) in Central Visayas, said the spate of killings in Cebu and nationwide demonstrated an inclination to disregard the most fundamental right to life.

“I don’t think there is still a safe place in the entire country much more in Cebu to live in,” Odron said.

Odron cited the case of Skyler Abatayo, a 4-year-old boy who was hit by a stray bullet inside his room during a police antidrug operation. (See story on Page A12)

Of the cases investigated by the regional CHR office, at least six involving either policemen or operatives of the regional PDEA office, were elevated to the Office of the Ombudsman.

The cases remain pending at the antigraft body.

The low number of complainants purportedly indicated that families of many EJK victims have lost hope of getting justice, dismayed by lack of progress in pending cases.

Odron called on the people to be vigilant and help stop the killings.

“The support of the community is indispensable,” Odron said.