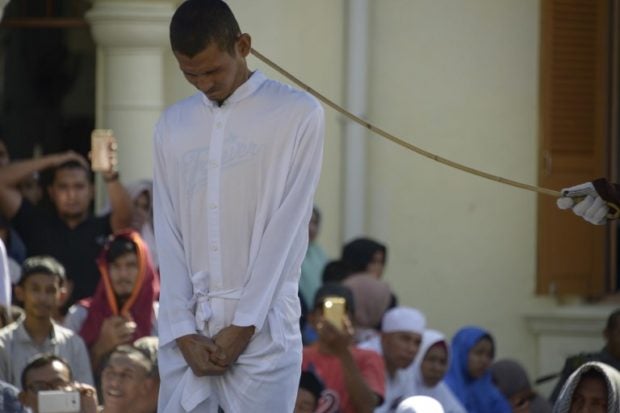 A member of Indonesia’s Sharia police (R) whips a man (L) accused of having gay sex during a public caning ceremony outside a mosque in Banda Aceh, capital of Aceh province on July 13, 2018.
A gay couple was publicly whipped in Indonesia’s conservative Aceh province on July 13, despite an earlier pledge by officials to stop the punishment after it drew international criticism. / AFP PHOTO / CHAIDEER MAHYUDDIN

A gay couple was publicly whipped in Indonesia’s conservative Aceh province Friday, despite an earlier pledge by officials to stop the punishment after it drew international criticism.

The two men were flogged more than 80 times each for having gay sex, which is outlawed under local Islamic law, as a jeering crowd hurled abuse at them.

They were among 15 people whipped outside a mosque in the provincial capital Banda Aceh Friday for crimes also including drinking or selling alcohol and showing affection in public.

A crowd of about 1,000 people, including tourists from neighbouring Malaysia, snapped pictures and shouted “Flog them harder” as a hooded figure rained down lashes from a rattan cane on their backs.

The unidentified men were the second gay couple whipped in public this year in Aceh, as the small LBGT community in Indonesia faces increasing discrimination.

Aceh is the only region in Indonesia, the world’s most populous Muslim-majority country, that imposes Islamic law.

Public flogging is a common punishment for a range of offences including gambling, drinking alcohol, and having gay sex or relations outside of marriage.

Aceh, on the northern tip of Sumatra island, said this year it would stop public whippings but continue the punishment behind prison walls.

Rights groups slam public caning as cruel and Indonesia’s President Joko Widodo has called for an end to it.

But the practice has wide support among Aceh’s mostly Muslim population, including provincial governor Irwandi Yusuf, who himself was arrested last week on corruption charges.

The gay men whipped on Friday were apprehended by a vigilante mob at a Banda Aceh beauty salon earlier this year and handed over to police, authorities said.

Gay sex is not illegal elsewhere in Indonesia, but there has been a backlash against the community across the archipelago in recent years as same-sex marriage has been legalised in other countries.

Aceh started using religious law after it was granted special autonomy in 2001, an attempt by the central government to quell a long-running separatist insurgency.   /vvp