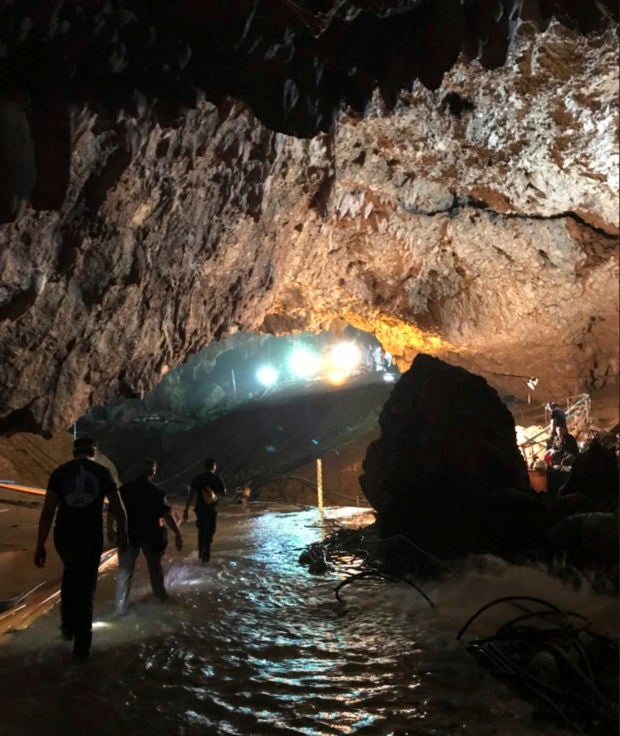 Rescuers who pulled a young Thai football team from deep inside a flooded cave were dismantling their worksite Thursday, as plans emerged to turn the spot into a museum in tribute to the daring operation.

At least one film production house was already working on a scheme to make a Hollywood treatment out of the heroics of divers, cavers and medics who risked their lives to free the “Wild Boars”.

Stunning footage of that rescue was released Wednesday showing the youngsters — aged 11 to 16 — being stretchered to safety.

They were also seen sitting cheerfully in their hospital beds, where they are being kept in isolation until doctors are sure they did not pick up any nasty diseases during more than two weeks in the dark.

Workers were Thursday packing up the industrial water pumps, heavy-grade machinery and construction equipment at the mouth of the Tham Luang cave, which had been a high-tech command centre during the 18-day ordeal.

Rescue chief Narongsak Osottanakorn told reporters the site would ultimately be converted into a museum showcasing the clothes and equipment used during the dramatic rescue.

“I believe it will become another highlight in Thailand,” he said. “Tourists will come visit.”

About 50 people were working at the site, National Park ranger Pinitpong Wongma told AFP, adding that he expected work would continue until at least Sunday.

“Nobody is allowed to go inside the cave at all even though there is still a lot of equipment there because water levels have been rising since the rescue mission,” he said.

The rescue of the “Wild Boars” team was still being celebrated in Thailand as the 12 boys and their 25-year-old coach recovered in a local hospital.

The Nation newspaper called the operation a “Triumph of global cooperation” on its front page Thursday while the Bangkok Post published a collage of images of those involved under the heading “You Are Heroes.”

The saga started on June 23 when the players walked into the Tham Luang cave complex after football practice and were trapped when monsoon flooding blocked their exit.

Over the following week, experts from around the world descended on northern Thailand and rescuers pumped out more than 50 Olympic-sized swimming pools-worth of water.

A huge media pack of more than 1,000 journalists gathered at the mouth of the cave feeding audiences all over the globe with every twist and turn of the dramatic rescue until its joyful conclusion on Tuesday.

The huge international interest in the story sparked immediate talk of books and films.

Michael Scott, the managing partner of faith-based production house Pure Flix, said the company intends to pursue a film about the against-the-odds mission.

Scott, who lives in Thailand and went to the site in Chiang Rai as the boys were being pulled to safety, made the announcement late Tuesday on Twitter in a video.

“We’re here really looking at this as a movie that could inspire millions of people across the globe,” Scott said.   /vvp