Palace:  Enemies of gov’t behind ‘PH, Province of China’ banners 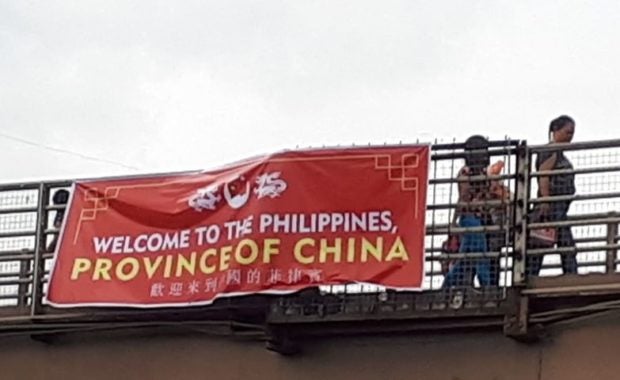 “Welcome to the Philippines, Province of China” banner

Malacañang has accused “enemies of the government” as the perpetrators behind the hanging of “Welcome to the Philippines, Province of China” banners around Metro Manila on Thursday morning.

“It’s absurd and I’m sure it’s the enemies of the government behind it,” Presidential Spokesperson Harry Roque said in a Palace briefing.

The banners effectively caught the attention of the public as they were hanging on footbridges along major thoroughfares, coinciding with the second anniversary of The Hague ruling that favored the Philippines’ diplomatic protest against China on the South China Sea dispute.

READ: ‘Welcome to the Philippines, Province of China’ banners hung on footbridges

Roque mocked those who hung the banners but did not identify the enemies of the government he was referring to.

“So, to them: Try again. You need a better gimmick than that,” he said.

They were “obviously propagating a lie that we have given up on our national territory,” Roque also said.

“It’s farthest from the truth,” he pointed out.

The Palace official assured the public that the government continues to assert Philippines sovereignty in the disputed sea even as many critics slam the administration for its alleged inaction on the regional issue.

“We continue to assert our sovereignty and sovereign rights but we have decided to move on issues which are non-controversial because we know the final resolution, particularly on the issue of sovereignty on the disputed islands, will take many years to resolve since this was not a subject of the arbitral ruling that we won two years ago,” Roque said.

Duterte opted to set aside the landmark arbitral ruling as he mended ties between the Philippines and China.