Thailand cave rescue to be turned into Hollywood movie 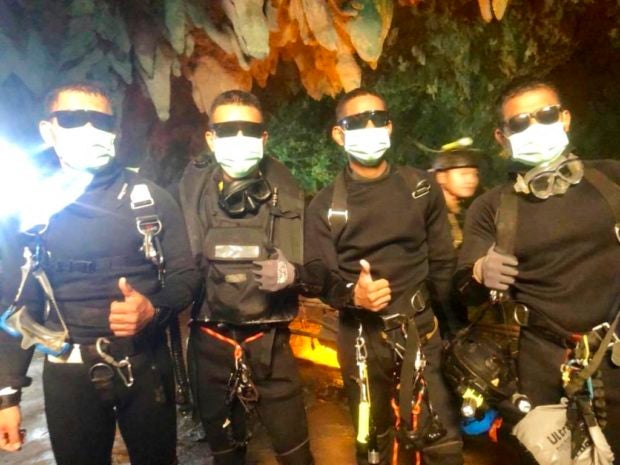 In this undated photo released by Royal Thai Navy on Tuesday, July 10, 2018 show the last four Thai Navy SEALs come out safely after completing the rescued mission inside a cave where 12 boys and their soccer coach have been trapped since June 23, in Mae Sai, Chiang Rai province, northern Thailand. Thailand’s navy SEALs say all 12 boys and their soccer coach have been rescued from a flooded cave in far northern Thailand, ending an ordeal that lasted more than two weeks. (Royal Thai Navy via AP)

Los Angeles, United States – The mission to rescue 12 boys and their soccer coach from a Thai cave is to get the Hollywood treatment in a movie announced by faith-based production house Pure Flix.

Managing partner Michael Scott, who lives in Thailand and was at the rescue site in Chiang Rai as the boys were being pulled to safety, made the announcement late Tuesday on Twitter.

“I couldn’t be more excited. This story has meant so much to me as I have followed it in Thailand this summer,” he said in a video filmed at the scene of the flooded cave in the country’s north.

“My wife actually grew up with the Thai Navy SEAL that died in the cave. To see all that heroic bravery in the cave, and to get all the divers out, it’s just such a touching event and so personal to me.”

Stunning video footage emerged Wednesday of several of the “Wild Boars” team – aged 11 to 16 – being freed from the Tham Luang cave on stretchers, ending a successful three-day rescue.

They are in good physical and mental health, according to doctors, despite a harrowing 18 days inside the dank, dark cave before a risky rescue operation that was dubbed “Mission: Impossible”.

Scott’s wife has been involved with planning the funeral for Saman Kunan, the former SEAL that died on July 6 while helping install oxygen tanks in preparation for the extraction.

“We’re here really looking at this as a movie that could inspire millions of people across the globe,” Scott said.

“And we’re here witnessing the events, gathering some contacts and everything, to really tell a story about an international effort, the entire world coming together to save (12) kids trapped in this Thai cave,” Scott added.

Pure Flix co-founder David A.R. White told The Wall Street Journal the company – which was behind the 2014-18 “God’s Not Dead” trilogy – was talking to actors, writers and potential investors.

“Pure Flix joins the rest of the world in thanking God for answering prayers for the successful rescue of those trapped in the cave in Thailand,” the company said in a statement.               /kga

Read Next
2 dead, 3 hurt in Quezon’s ‘killer highway’ accident
EDITORS' PICK
Disease expert: Omicron variant may behave like Delta
Palace: Malls, establishments may require customers to use of face shields
This new condo in the South will make you want to turn a new leaf
Smart offers wireless fiber-like speeds to Filipino homes with country’s first 5G Prepaid Home WiFi
Syringes for Pfizer vaccine arriving on December 2 — NVOC chairperson
Legarda: Ending Violence Against Women, a cause for all
MOST READ
Bongbong Marcos to face another disqualification case
Christine Bersola, Julius Babao cleared of cancer after colonoscopy, endoscopy
Former PM Abe says Japan, US could not stand by if China attacked Taiwan
Tropical storm intensifies as it approaches PAR
Don't miss out on the latest news and information.