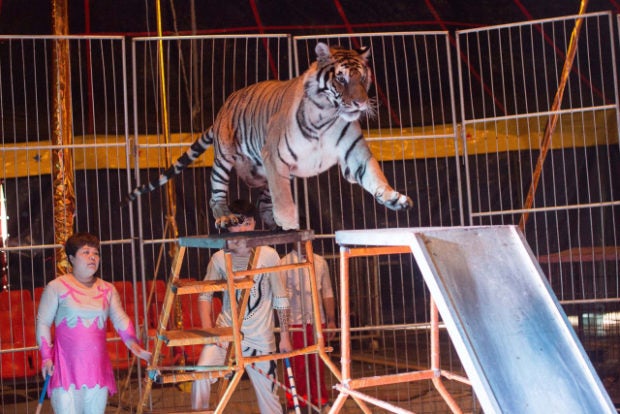 Circus members watching as a Siberian tiger jumps during a show at the camp of the Chinese Prosperous Nation Circus Troupe. Image: NICOLAS ASFOURI / AFP

A crowd of just 10 people watched the endangered Siberian tiger roar on command on his hind legs and pounce through hoops inside the big top of the Chinese Prosperous Nation Circus Troupe.

Lions and a young bear with a wound on its snout followed, performing tricks for the few who braved the sweltering heat in southern Guangdong province to help keep the travelling circus going for another day.

The use of wild animals in circus shows has come under growing criticism around the world, with some countries banning the practice, but for the Chinese troupe, the beasts are considered a major attraction.

“Many Chinese live in big cities where it’s hard to get out into the wilderness. We bring nature to them,” Li Weisheng, the troupe’s manager, told AFP.

Circuses have a long history in China. Called “maxi”, pronounced “mah-shi” meaning “stunts on a horse”, they have a history going back more than 2,500 years and would often pair acrobatic performances with stunts on galloping horses.

The use of large cats, monkeys and bears is a more recent practice.

China has some of the world’s laxest animal rights laws, and campaigners have long called for tougher regulations on the treatment of animals in traveling circuses.

The two owners of the troupe, Li Rongrong and Li Ruisheng, were arrested in 2016 for illegally transporting rare and endangered animals and sentenced to 10 and eight years in prison, respectively, but were cleared of all charges at a second trial last year.

The troupe’s animals — two African lions, a two-year-old black bear, a pack of dogs and the tiger — spend most of their time in tiny metal cages under a big tent.

The animals are a major draw, Li, the manager, said, standing next to the red and white striped tent in the city of Dongguan, although he admitted attendance has dropped in recent years.

The tiger and a lioness with a cut tail — both about a year old — share one cage, in which they restlessly pace around each other. A few times a day, they are allowed to play in the circus ring.

The lone bear grasped the top bars of his cage and swung his body back and forth.

In the past few years, multiple videos have emerged of apparent animal abuse in China, such as a circus tying down a Siberian tiger for audience members to sit on for photos, which sparked widespread outrage.

The members of the Chinese Prosperous Nation Circus Troupe, however, say they will do what they have to to keep their tradition alive and insist they are working in the interests both of the public and the animals.

“We are helping the public learn more about nature and animals,” said Li. NVG