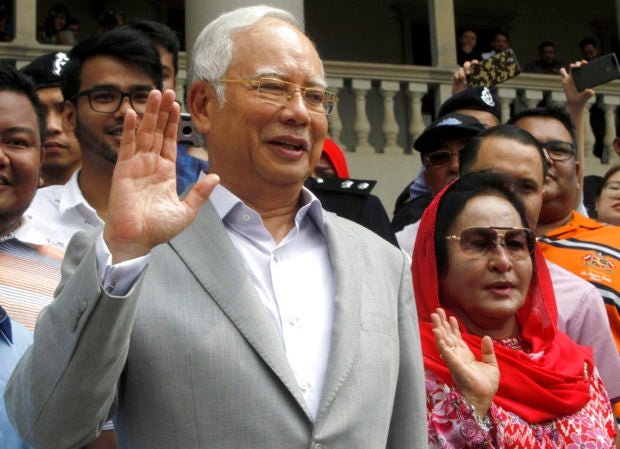 Former Malaysian Prime Minister Najib Razak and his wife Rosmah Mansor wave to their supporters as they exit the High Court of Malaya, in Kuala Lumpur, Malaysia on July 9, 2018.  AP

Malaysian authorities have been pursuing Low, known just as Jho Low, since a new government reopened investigations into the scandal. 1MDB was set up by former leader Najib Razak but it accumulated billions in debts and authorities in the US, Switzerland and several other countries are investigating.

National police chief Mohamad Fuzi Harun said Macau authorities informed him two days ago that Low had fled the territory but didn’t say where he went.

Malaysia canceled Low’s passport but Fuzi said Low could have several travel documents, making it tougher to trace him. Interpol has issued an arrest notice for Low at Malaysia’s request, and Fuzi said he hoped to soon get news about Low’s whereabouts.

US prosecutors allege that Low was a central figure in looting and laundering at least $4.5 billion from the fund. A friend of Najib’s stepson Riza Aziz, Low had no official role at 1MDB but had considerable influence over its dealings and was often in contact with Najib, according to the Justice Department.

Switzerland Attorney-General Michael Lauber said Tuesday that the scandal could involve an estimated $7 billion in fraud, far greater than the US figure.

A statement issued by his office after Lauber’s meeting in Kuala Lumpur with his Malaysian counterpart Tommy Thomas said Switzerland has initiated proceedings against six people, not including Najib, and two private banks.

Najib was charged last week with criminal breach of trust and abuse of power, making him one of few Southeast Asian leaders to be prosecuted after losing office. Anger over the 1MDB saga contributed to the surprise defeat of Najib’s long-ruling coalition in May 9 elections, ushering in Malaysia’s first change of power since its independence from Britain in 1957.

Najib denies any wrongdoing and has accused the new government of pursuing a vendetta against him. Police have also seized jewelry and valuables valued at more than 1.1 billion ringgit ($273 million) from properties linked to Najib. /ee