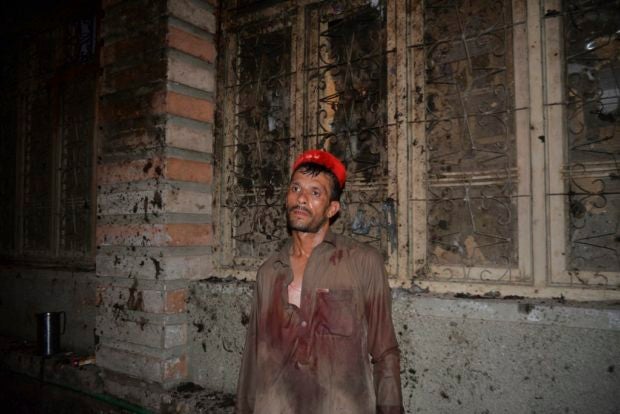 A Pakistani political worker stands at a site of blast in Peshawar, Pakistan, Tuesday, July 10, 2018. Police in Pakistan say a suicide bomber has killed a secular party leader and many supporters during an election rally in the northwestern city of Peshawar. (AP Photo/Muhammad Sajjad)

PESHAWAR, Pakistan — The Pakistani Taliban on Wednesday claimed responsibility for an overnight suicide bombing at a rally that killed a secular politician and 20 others two weeks before nationwide elections.

Mohammad Khurasani, a spokesman for the Pakistani Taliban, said they targeted the Awami National Party rally in the northwestern city of Peshawar, killing Haroon Ahmed Bilour, a candidate for a seat in the provincial legislature. Another 65 people were wounded.

Islamic extremists grew to despise the ANP when it ruled the Khyber Pakhtunkhwa province, of which Peshawar is the capital, from 2008 to 2013. During that time the military waged a major offensive against militants in the Swat Valley. The militants responded by carrying out a wave of attacks ahead of the 2013 elections, killing hundreds of ANP supporters.

Bilour’s father, Bashir Ahmed Bilour, was killed by a suicide bomber in 2012.

The Pakistani Taliban said the attack on Tuesday night was an act of revenge for the ANP’s rule. It vowed to carry out more such attacks and asked people to stay away from ANP rallies.

Bilour’s family called on his supporters to remain calm.

“I am also ready to sacrifice my life for your rights, but I request you to exercise restraint,” Bilour’s 16-year-old son Daniyal, who was wounded in the bombing, told supporters at his home. He said his father’s funeral would be held later Wednesday.

Tuesday’s bombing was condemned by political parties and the government. The caretaker Prime Minister Nasir-ul-Mulk has ordered authorities to ensure peace during the July 25 vote.

The bombing came hours after the army said it would deploy more than 370,000 security forces to polling stations to ensure free, fair and transparent national elections. That is more than five times the number of troops deployed during the last elections in 2013, when the security situation was much worse.

Maj. Gen. Asif Ghafoor, an army spokesman, said the troops would provide security at 85,000 polling stations and carry out other election-related duties following a request from the civilian body overseeing the vote. Nearly 135,000 of the troops have been called up from retirement.

The bombing at the rally was the first major attack since Mullah Fazlullah was killed in a US drone strike in Afghanistan in June. The Pakistani Taliban appointed Mufti Noor Wali Mahsud as their new chief shortly thereafter.     /kga