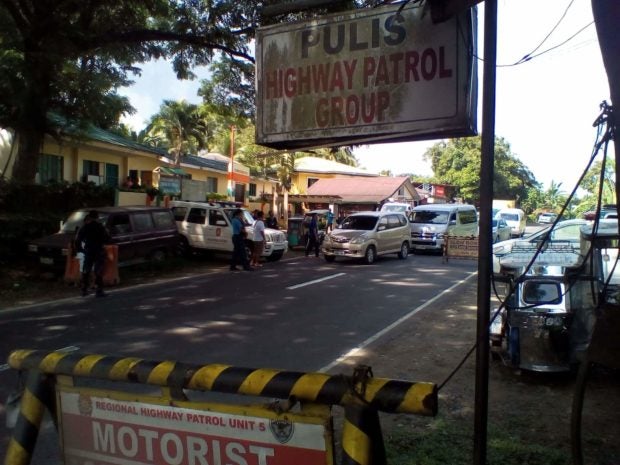 Two of the suspected killers of General Tinio town Mayor Ferdinand Bote, were using this Toyota Avanza, when they were arrested in a checkpoint in Barangay Cabasag, Del Gallego, Camarines Sur on Wednesday morning. (Photo from the PNP Highway Patrol Group in Bicol)

Police said Florencio Suarez, 48, and Robert Gumacay, 35, were nabbed after police flagged down their beige Toyota Avanza at a checkpoint on Andaya Highway at Barangay Cabasag at 9:30 a.m.

Recovered from the suspect was a caliber .45 pistol, which was seen in plain view during checkpoint, according to police.

Del Gallego town is near the boundary of Camarines Sur and Quezon.

Insp. Maria Luisa Calubaquib, spokesperson for the Bicol Police Regional Office (Bicol PRO), said the Criminal Investigation and Detection Group (CIDG) in Central Luzon, had alerted the Del Gallego police about the suspects whose vehicle could possibly pass by the town.

This prompted the police, the CIDG and the Highway Patrol Group (HPG) to immediately set up a checkpoint.

Escobal said the suspect is now currently under the custody of the Del Gallego police station.

Bote was killed in an ambush in Cabanatuan City last July 3.

In Camp Crame, Director General Oscar Albayalde, Philippine National Police chief, said one of the arrested suspects could be the gunman, and the police were looking for “four to five more men” in the killing.

These other suspects were involved in “giving [the gunman] refuge, the other the one who possibly hired them, so our persons of interest here are probably six to seven [people],” Albayalde told reporters.

He said the police had “physical evidence” in the form of security camera footage as well as witness testimonies linking Suarez and Gumacay to the murder.

According to the witness, the gunman approached Bote’s vehicle, then escaped with another suspect on a motorcycle. The two then transferred to a vehicle in a nearby barangay in Cabanatuan City.

Albayalde said it was this vehicle that also gave a lead in the case. He did not elaborate.

“Most likely, the suspects belong to a gun-for-hire group. That’s why when we were monitoring them, they ran to the place where they were arrested,” he said.

The motive of the killing had yet to be established, he said, adding that the police already had “good leads,” including that on the mastermind.

Initial reports from the HPG said the Avanza was registered to one Carolina Bartolome of the City of San Jose del Monte in Bulacan province.

HPG records showed the car owner requested for a hold-order status on the vehicle in 2012 for unknown reason.

The suspects were detained at the Del Gallego town jail and would be taken to Camp Crame.

In General Tinio, Bote’s family had not issued a statement on the arrest of the
suspects.

But Mayor Ferdinand Abesamis of Peñaranda town, Nueva Ecija, the chapter president of the League of Municipalities of the Philippines, said he believed the vehicle driven by the suspects when they were arrested in Camarines Sur was the same one used by a backup team during the attack on Bote in Cabanatuan City.

Read Next
Zubiri on signing of anti-hazing law: Atio Castillo did not die in vain
EDITORS' PICK
Diokno to Duterte: OK to make fun of buck tooth, but focus on people’s needs first
10 Filipinos positive for COVID-19 in UK, 7 in Ireland — envoy
IATF to LGUs: Issue ordinances vs attacks on frontliners, COVID-19 patients
Robredo spox thanks Duterte for defending VP’s efforts vs COVID-19
Quick chat with Nicole Andersson: ‘You really don’t need much to be happy’
Nograles: Cabinet members to donate 75% of monthly salary to aid COVID-19 fight
MOST READ
Coronavirus hotbed Rizal to shut borders on April 6
Sen. Migs Zubiri’s wife recounts lessons from the COVID-19 ordeal
Government in no rush to end Luzon lockdown
Gov’t mulling quarantine period extension of 15-20 more days
Don't miss out on the latest news and information.