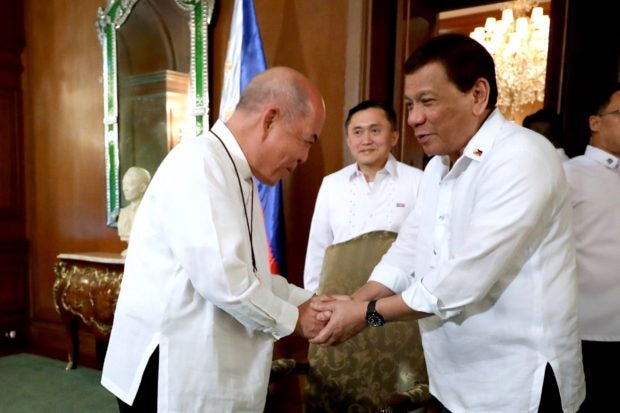 A day after promising to stop attacking the Catholic Church, President Rodrigo Duterte on Tuesday dished out stinging words against the Church.

“Do not use God in the platform of your criticism. Because when I answer, if you drag God into the issue … I have the right to answer,” the President said in a speech at Clark Freeport in Pampanga province.

In reply to a reporter’s question after his speech, however, the President denied he attacked the Church again.

His speech came barely a day after he met with Catholic Church leader Romulo Valles and agreed “to a moratorium on statements’’ against the Church.

In Monday’s meeting with Valles, president of the Catholic Bishops’ Conference of the Philippines (CBCP) and Davao archbishop, the President said he also wanted the clergy to stop using the pulpit to criticize him.

“One of the things the President did mention was, given there is separation of Church and State, let us not use the pulpit to criticize the Duterte administration,” said presidential spokesperson Harry Roque.

In the same meeting with his longtime friend from Davao City, the President agreed to a “moratorium on statements about the Church.”

The dialogue came hours after Valles called for a day of prayer and three days of fasting for people who had blasphemed God and murdered others. It wasn’t known if the President’s “stupid God” remark came up in their one-on-one meeting.

While the President could handle criticism from Filipinos, he disliked the idea of the clergy using their position to attack him, Roque said.

“He accepts criticisms of citizens. But if possible, these criticisms should not come from the pulpit and the Church because we have a separation of Church and State,” he said on Tuesday.

In their chat, the President “did much of the talking” while the archbishop “did most of the listening,” Roque said when asked if Valles raised any issue.

The dialogue would be followed by a meeting between the CBCP and a Malacañang panel tasked to conduct dialogues with religious groups, he said.

The President had called for the dialogue amid growing animosity with the Church over its criticism of his bloody war on drugs, and his criticism of abuses by the clergy.

It became more urgent after Mr. Duterte called God “stupid” in a June 22 rambling speech that questioned the biblical story of the creation.

The President lamented in that speech that Adam and Eve’s sin in Christian theology resulted in all the faithful falling from divine grace.

“Who is this stupid God? This son of a bitch is then really stupid,” he said. On Friday, he said he would resign if even one witness could prove that God existed.

On Monday, Valles called for a day of prayer on July 16 to invoke “God’s mercy and justice on those who have blasphemed God’s Holy Name, those who slander and bear false witness and those who commit murder or justify murder as a means for fighting criminality.”

Starting July 17, the bishops asked Filipino Catholics to join them in three more days of prayers with fasting and almsgiving.

The President has had a thorny relationship with Catholic bishops, who had criticized his antidrug crackdown and vulgar language and expressed alarm over the killings of three priests in brazen gun attacks in recent months.

In televised speeches, the 73-year-old leader has often lashed out at Catholic bishops, recalling reports of sexual abuses by members of the clergy, including a foreign Jesuit priest, who, he said, fondled him and other fellow students in a Catholic university.

The CBCP did not name the President in a carefully worded but highly critical “pastoral exhortation,” but the allusion to the President and his tough anticrime crackdowns, which have alarmed human rights groups, was clear.

To “those who arrogantly regard themselves as wise in their own estimation and the Christian faith as nonsense, those who blaspheme our God as stupid, Saint Paul’s words are to the point: ‘For the stupidity of God is wiser than human wisdom, and the weakness of God is stronger than human strength,’” the bishops said.

The CBCP statement was read at a news conference after more than 100 active and retired Filipino bishops and other Church officials concluded three days of meetings in Manila that focused on the President’s recent tirades against the Catholic faith and the killings of three priests. —WITH A REPORT FROM AP