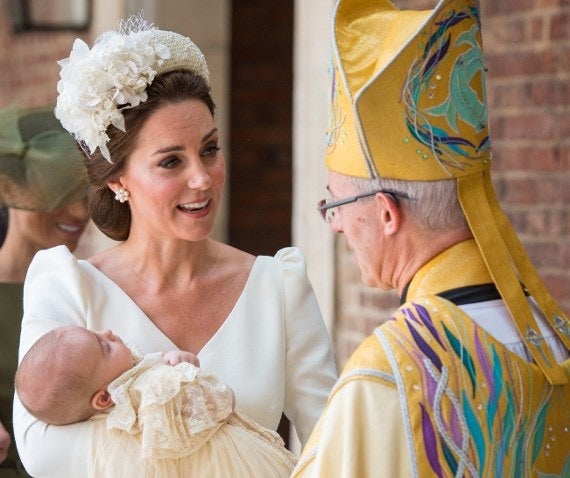 Britain’s Catherine, Duchess of Cambridge, holds Britain’s Prince Louis of Cambridge as she speaks to Archbishop of Canterbury, Justin Welby (right) on their arrival for his christening service at the Chapel Royal, St James’s Palace, London on July 9, 2018. AFP

LONDON, United Kingdom – Britain’s Prince Louis of Cambridge, the baby son of Prince William and his wife Kate, was christened on Monday but Queen Elizabeth II did not attend.

The monarch, 92, and her 97-year-old husband Prince Philip had attended the christenings of Louis’ older siblings Prince George and Princess Charlotte.

However, the decision for them not to attend Louis’ baptism at St. James’s Palace in London was understood to have been mutually agreed by the sovereign and the Duke and Duchess of Cambridge some time ago, and was not health-related.

Archbishop of Canterbury Justin Welby, the spiritual leader of the world’s Anglicans, led the service in the Chapel Royal at St James’s Palace.

Welby baptised Louis by pouring holy water from the River Jordan over his head.

The 11-week-old prince was fast asleep as Kate carried him into the chapel.

She told Welby that Louis was “very relaxed and peaceful”, adding: “I hope he stays like this.”

Louis is fifth in the line of succession to the British throne after his grandfather Prince Charles, his father William, George and Charlotte.

He is one of Queen Elizabeth’s seven great-grandchildren.

The sovereign and Prince Philip will return to London from the monarch’s private Sandringham estate in eastern England on Monday.

From the royal family, the baptism was attended by William’s father Prince Charles and his wife Camilla; William’s brother Prince Harry and his new wife Meghan; plus Louis’ siblings George and Charlotte.

From the duchess’s side, Kate’s parents Michael and Carole, brother James, pregnant sister Pippa and her husband James Matthews were there.

The six godparents, who also attended with their spouses, are all friends or family of William and Kate.

They include Guy Pelly, once dubbed the “court jester” to William and Harry for his wild ways that were often cited as a bad influence on the brothers in their youth, running their favorite drinking haunts.

Welby used the Lily Font, commissioned by queen Victoria for the baptism of her first child in 1841.

Louis wore the replica of the royal christening robe, first used in 2008. The original, retired in order to preserve it, was worn for all royal baptisms since 1841.

William and Kate were to host a private tea afterwards. As after George and Charlotte’s baptisms, guests will be served slices of the duke and duchess’s wedding cake.