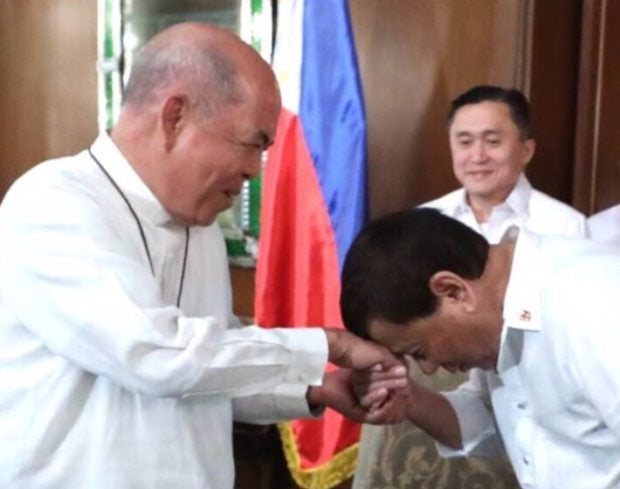 DIALOGUE IN MALACAÑANG Davao Archbishop Romulo Valles holds a dialogue in Malacañang with President Duterte, who agreed to refrain from issuing statements about the Roman Catholic Church. —CONTRIBUTED PHOTO

Catholic bishops on Monday called for a day of prayer and three days of fasting for people who had blasphemed God and murdered others ahead of a dialogue with President Rodrigo Duterte, who called God “stupid.”

In a pastoral exhortation that dealt with the President’s fulminations against the Church, the killings of priests and abuses of the clergy, Catholic Bishops’ Conference of the Philippines (CBCP) president Romulo Valles urged the faithful to always strive to be “peacemakers.”

“On July 16, 2018, on the feast of the Blessed Mother of Mount Carmel … let us spend a day of prayer and penance, invoking God’s mercy and justice on those who have blasphemed God’s Holy Name, those who slander and bear false witness, and those who commit murder or justify murder as a means for fighting criminality in our country,” the Davao archbishop said, without mentioning names.

Valles then invited the faithful to three more days of fasting and almsgiving from July 17 to 19.

The CBCP head later sat down with the President in Malacañang to mend rifts between the Church and the government.

After the 30-minute dialogue, the President agreed to refrain from issuing statements about the Church.

“The President agreed to a moratorium on statements about the Church after the meeting,” said presidential spokesperson Harry Roque.

The President sparked outrage in the predominantly Catholic country after calling God “stupid” in a June 22 rambling speech that at one point took aim at the biblical story of creation.

The dialogue had been planned for some time following the President’s repeated attacks on the Church over abuses by priests, but in an apparent response to the clergy’s criticism of the administration’s brutal crackdown on drugs.

In their exhortation, the bishops invoked St. Paul’s letter to the Corinthians to respond to individuals who “regard the Christian faith as nonsense” and “blaspheme God as stupid.”

“‘For the stupidity of God is wiser than human wisdom, and the weakness of God is stronger than human strength,’” Valles said in the document read on national television by Caloocan Bishop Pablo Virgilio David, CBCP vice president.

Those angered by the insulting statements of people in authority should find wisdom in Jesus’ exhortation “to offer the other cheek,” “bless those who curse you,” and “pray for those who mistreat you,” said the CBCP president.

Valles began by exhorting the faithful to “constantly strive to be peacemakers in these troubled times.”

“In these times of darkness, when there’s so much hatred and violence, when murder has become an almost daily occurrence, when people have gotten so used to exchanging insults and hurting words [on] the social media, we admonish the faithful to remain steadfast in our common vocation and mission to actively work for peace,” he said.

The CBCP president also said there was nothing new about priests being murdered for “witnessing to Christ” and being subjected to “ridicule and persecution.”

“Be not afraid! Did not our Master say, ‘Do not be afraid of those who kill the body but cannot kill the soul. Rather be afraid of the one who can destroy both body and soul into Gehenna,’” Valles said.

The sufferings of the Church leaders, however, pale in comparison with the sufferings of the poor, specifically slum dwellers being rounded up for loitering outside their homes, drug addicts labeled as “nonhumans,” drug suspects killed in cold blood, indigenous peoples forced to leave their homes to avoid being caught in crossfire, Valles said.

“We have a saying in Tagalog, ‘Ang sakit ng kalingkingan ay ramdam ng buong katawan’ (The pain of one part of the body is felt by the whole body.) Alas, this is not always true! There is no way we can feel each other’s pains when some parts of the body are numbed by sheer indifference,” he said.

The CBCP said it was accountable for the abuses by fellow Church leaders and was duty-bound “to correct them.”

Valles declared that the Church was not out to destabilize the government and would accord respect for officials who upheld “basic spiritual and moral principles.”