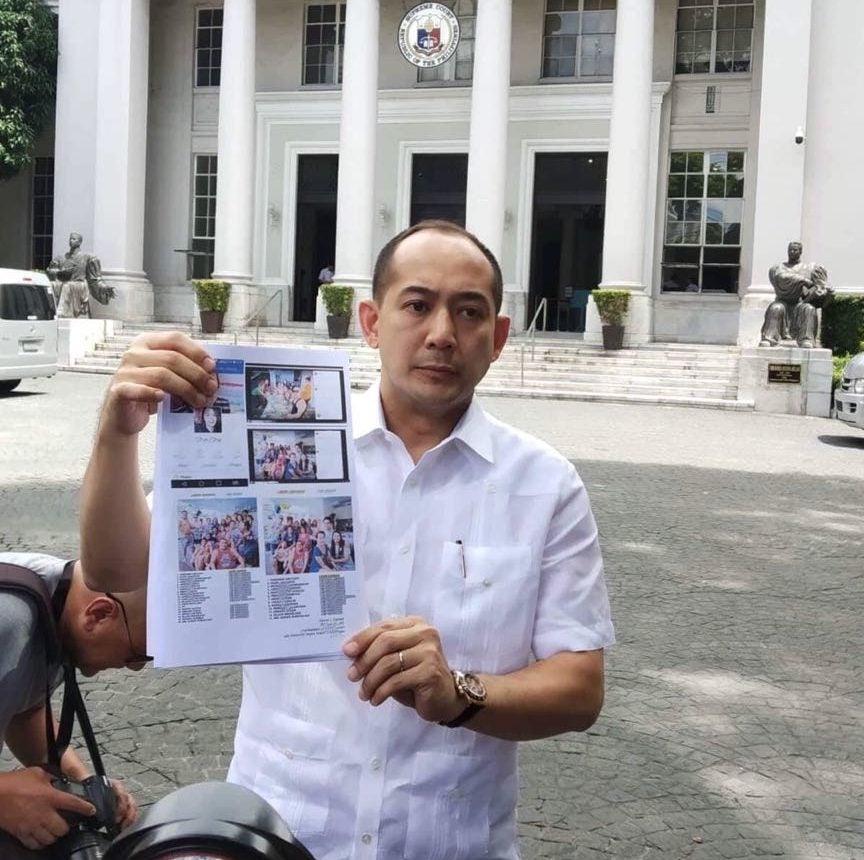 Bongbong Marcos’ spokesperson Atty. Vic Rodriguez showing to the media photos of the alleged outing which was attached to the pleading the filed before PET. TETCH TORRES-TUPAS/INQUIRER.net

The camp of former Senator Ferdinand “Bongbong” Marcos has asked the Supreme Court sitting as Presidential Electoral Tribunal (PET) to investigate the supposed outing of its personnel and a revisor of Vice President Leni Robredo.

In his Manifestation of Grave Concern, Marcos informed PET that 24 revisors and officers of the PET fraternized with the revisor of Robredo at a resort in Pansol in Calamba, Laguna a couple of weeks ago.

Garcia said they learned about the outing through the Facebook account of PET Head Revisor Maria Katrina (Che-Che) Rosales when she posted the photos of the “Pansol outing” on Sunday, June 24, 2018. 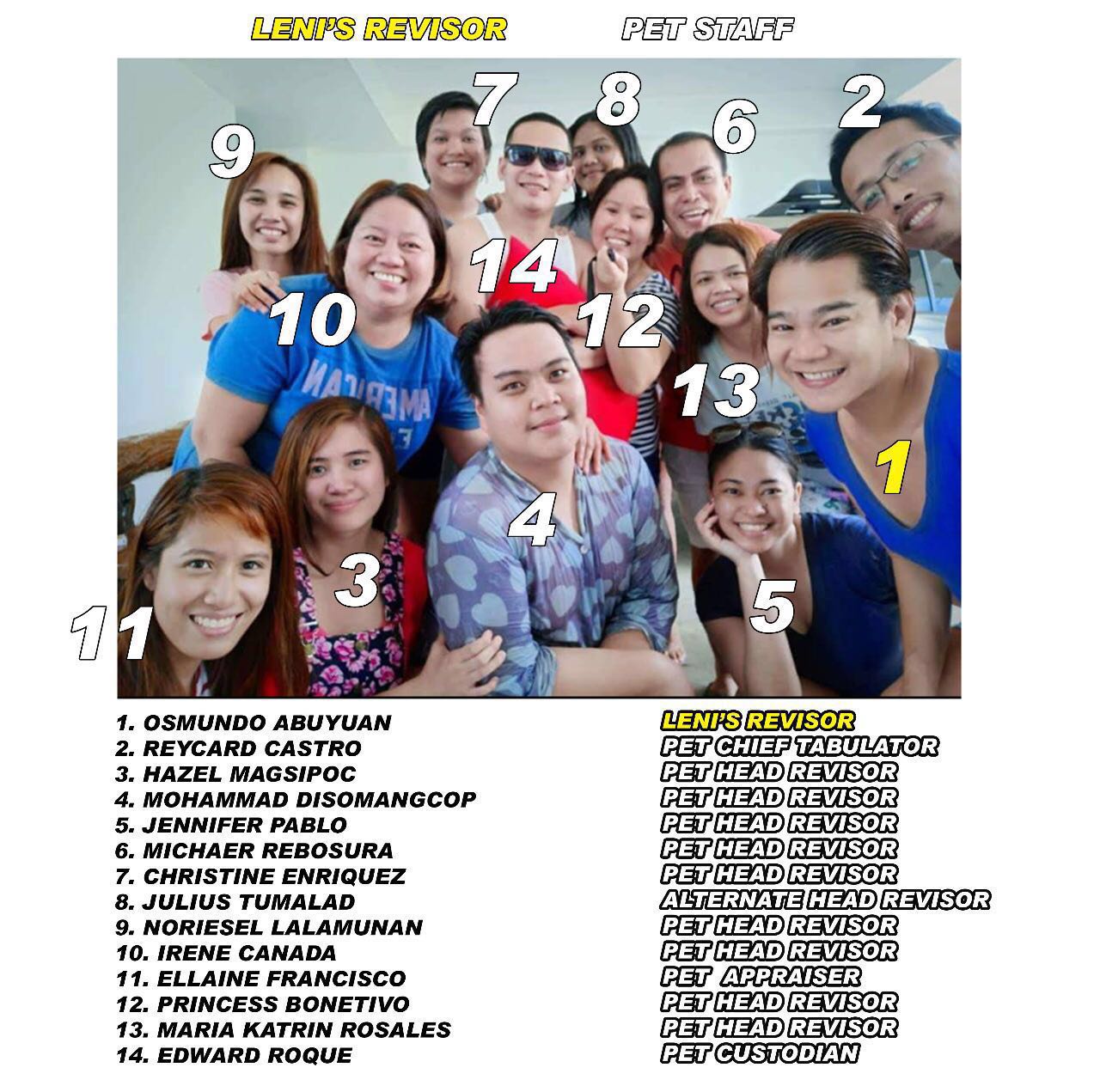 Photo of alleged outing as shown by Atty. Rodriguez

That motion noted that several days later — on July 2, 2018 — Rosales, in an “apparent [attempt] to rectify her mistake of publicly posting the incriminating photos of their ‘Pansol outing,’” deleted the photos from her Facebook account.

Upon confirmation with the resort, Garcia said the outing was booked by Buensalido. Atty. Vic Rodriguez and further stated that also based on the receipt, it was Buensalido who paid for the resort. 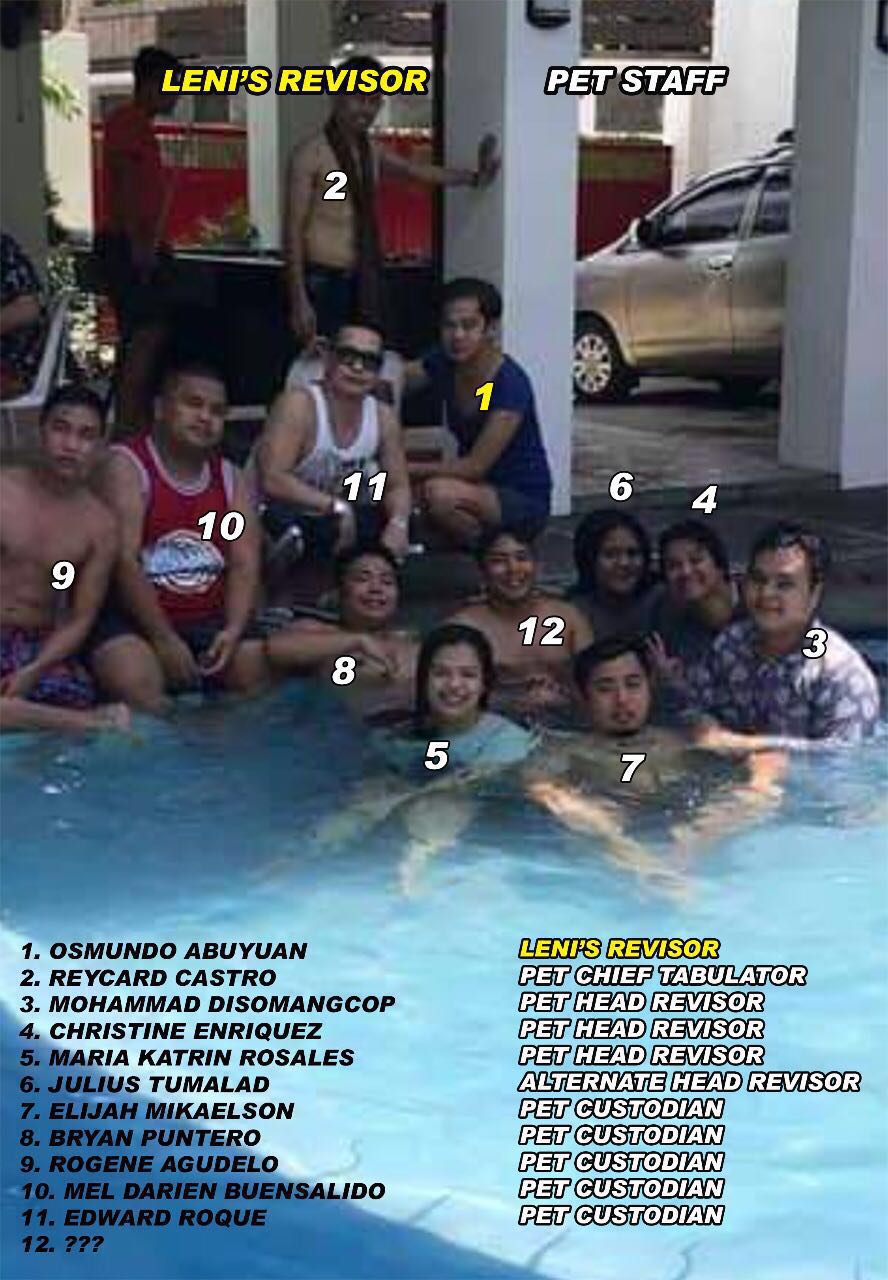 Photo of alleged outing as shown by Atty. Rodriguez

The PET personnel and its own revisors of the candidates conduct and examine the manual recount and judicial revision of ballots in areas identified by both Marcos and Robredo.

Under PET rules, the Revision Teams are tasked to conduct a revision of ballots under the strict supervision of the Tribunal or its duly authorized personnel/representatives.

“The members of the Revision Teams shall discharge their duties with the highest degree of trust, integrity, and probity. They shall exercise extraordinary diligence and take precautionary measures to prevent the loss, disappearance or impairment of the integrity of ballots, election documents, whether electronic or printed, and other election paraphernalia,” the rules stated.

“Fraternizing with the party revisor for the protestee is obviously prohibited by this Honorable Tribunal since this act is proscribed not only by the Code of Conduct for Court Personnel but also by the Canon of Judicial Ethics,” Garcia said.

He further stated that the “Pansol outing” would imply that Robredo’s camp had already “infiltrated and curried favor with these PET personnel in order to manipulate, influence and control the revision proceedings and maneuver the results in her favor.

“Protestant Marcos cannot help but wonder if the ongoing judicial recount and revision proceedings have been compromised given that the same is presided by the very same PET personnel who appear to be in cahoots with the protestee’s camp,” he added. Garcia also pointed out that the role of the Head Revisors are crucial in the ongoing revision of votes because they are the ones who preside over their respective Revision Committees and control the conduct of the judicial recounting of ballots.

“In fact, these Head Revisors and the Alternate Head Revisors are in charge of initially determining whether the ballots found inside the ballots are valid, rejected or stray. They are likewise mandated to determine if the protested ballots comply with the 50% shading threshold as originally decided by the PET,” he explained.

Garcia said that the actions of the PET personnel constitute improper and unethical behavior which immeasurably affects not only the integrity of the ongoing election protest but, more importantly, the honor and dignity of the Judiciary as an institution.

“Consequently, it is imperative for this Honorable Tribunal to immediately INVESTIGATE this incident and to impose the appropriate SANCTIONS on these PET personnel, the protestee and her party revisor,” Garcia asked the Tribunal. /je