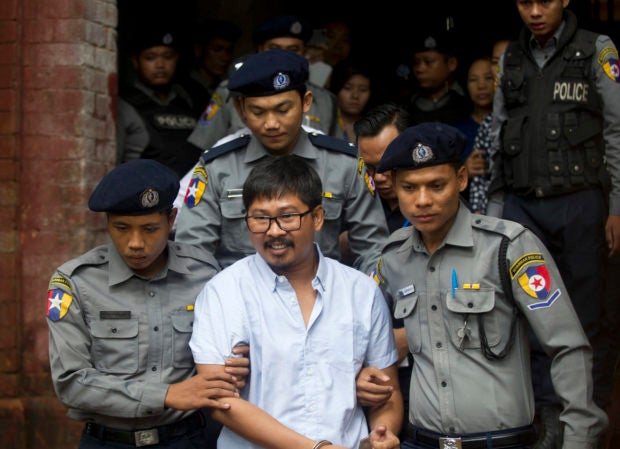 Reuters journalist Wa Lone (center) is escorted by police as he leaves the court after trial Monday on July 9, 2018 in Yangon, Myanmar. (AP)

YANGON, Myanmar — A judge in Myanmar ruled Monday that the prosecution of two Reuters journalists charged with illegally possessing official information can go to a full trial.

The case of Wa Lone and Kyaw Soe Oo went through several months of hearings to determine if there was enough evidence to support the charges, which the reporters denied.

The two had been working on stories about the Rohingya crisis in western Myanmar, where state security forces are accused of carrying out massive human rights abuses that caused about 700,000 of the Muslim ethnic Rohingya to flee across the border to Bangladesh.

The charges they are facing carry a punishment of up to 14 years in prison.

Reuters urged the authorities to release the two.

“We are deeply disappointed that the court declined to end this protracted and baseless proceeding against Wa Lone and Kyaw Soe Oo. These Reuters journalists were doing their jobs in an independent and impartial way, and there are no facts or evidence to suggest that they’ve done anything wrong or broken any law,” Stephen J. Adler, Reuters’ president and editor-in-chief, said in a statement.

“Today’s decision casts serious doubt on Myanmar’s commitment to press freedom and the rule of law,” it said.

The Myanmar military’s actions against the Rohingya have come under harsh criticism internationally, including charges that it was carrying out ethnic cleansing. /ee