Supporters, family vow to get justice for Mayor Halili 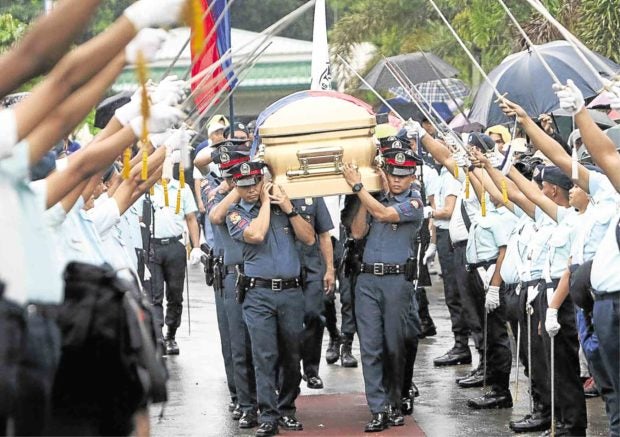 WALK FOR JUSTICE Hundreds of friends and supporters wearing yellow shirts join the family of Antonio Halili in Sunday’s funeral procession dubbed “walk for justice” for the assassinated mayor of Tanauan City, one of five local officials killed last week. —RICHARD A. REYES

TANAUAN CITY, Batangas — Hundreds of people turned up on Sunday for the funeral of Antonio Halili, this city’s mayor once known as “Little Digong,” for his hard stance on crime.

Under overcast skies and a light drizzle, Halili, 72, was laid to rest after a final public viewing of the mayor’s remains at City Hall.

Halili was assassinated last Monday as he led city employees in singing the national anthem during flag-raising rites in front of City Hall.

President Rodrigo Duterte earlier said Halili was involved in the narcotics trade, the reason the mayor was stripped of his control over the local police last year.

Halili’s family and colleagues have denied the allegation.

This was before Halili’s grandchildren sang a cappella Bon Jovi’s “Bed of Roses”—their grandfather’s favorite song.

“You were taken away from us. [You were] a strong person in every aspect of life. I will do my best to give you justice,” said Halili’s daughter, Angeline, 45.

Halili’s widow, Gina, described the slain mayor as honorable and loving not only to his family but also to his constituents.

The police gave Halili a 21-gun salute as the Philippine flag was draped over his gold coffin.