The cat-and-mouse game to stop cyberporn 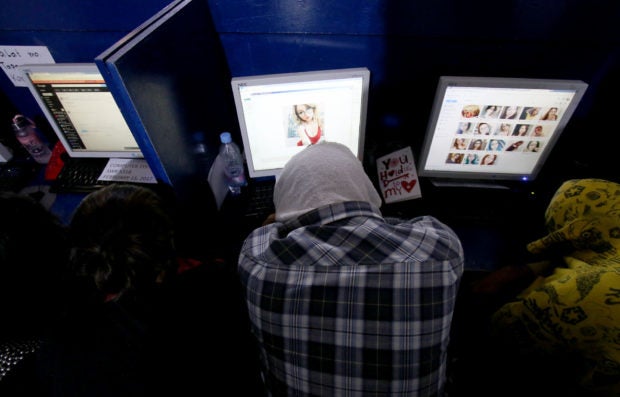 RAID ON CYBERSEX DEN At least 30 people were arrested during a police raid on a cybersex den at Barangay Old Balara, Quezon City, in February last year.Quezon City is one of the few places where law enforcers fighting cyber pornography are active. —RICHARD A. REYES

CEBU CITY—Online child pornography has become a “cottage industry” in isolated parts of the country, according to authorities.

Parents are lured by the easy money while some children are left believing that there is nothing wrong with what they are doing since there is no actual sexual contact.

Data from the International Justice Mission (IJM), a US-based nonprofit that fights human trafficking and child exploitation, showed that more than 300 children in the Philippines have been rescued since 2011 after law enforcers stepped up their campaign against cyberpornography.

At least 133 suspects nationwide have been arrested as of April 2018—77 percent of whom were parents, relatives, and close family friends of the victims.

According to John Tanagho, IJM Cebu field office director, online sexual exploitation of children happens all over the Philippines, especially in poor and isolated areas.

But he lamented that law enforcers fighting cyberpornography had been active only in a few places — Pampanga, Metro Manila, Batangas and Cavite in Luzon, Cebu, Negros Occidental, Leyte and Bohol in the Visayas and in the cities of Davao, Butuan and Iligan in Mindanao.

“It’s very alarming and it’s getting bigger,” said Francis Señora, senior agent of the cybercrime department of the National Bureau of Investigation in Central Visayas.

“Child pornography is an industry, and people are earning money. Children are made to believe there’s nothing wrong with it,” he said.

In Cebu, law enforcers have rescued 155 victims and arrested 53 suspects since 2011. Only 11 of the child exploiters have so far been convicted.

Tanagho said the state of online sexual exploitation of children, or child cyberpornography, was disturbing.

The cybercrime office of the Department of Justice monthly receives more than 2,600 “cybertips” — referrals of different forms of online sexual exploitation, he said.

“It is not just nude photos as some think. Online sexual exploitation of children involves the actual sexual abuse of children,” he added.

“Young Filipino children have been molested and sexually abused by adults, forced to have sex with other children, made to use sex toys to portray sex acts, made to touch themselves and other sexually explicit conduct.”

IJM records showed that more than 50 percent of the rescued victims in the Philippines were just 12 years old or younger, he said.

Some of those rescued were just babies and toddlers, he added.

Cyberpornography thrives because some people are easily enticed by easy money without hard work, Tanagho said.

Sex predators pay between P1,000 and P5,000 for each sexual act livestreamed, he said.

“And because the transactions happen online, the suspects believe they are anonymous on the internet and think police can’t find them. They think they won’t get caught,” he added.

Instead of using laptops, some customers have shifted to cell phones, thinking it would be difficult for law enforcers to catch them in the act.

Although technology makes it harder to combat cyberpornography, Tanagho said Philippine authorities continued to cooperate with international law enforcement agencies in cracking down on online child sexual exploitation and abuse.

Their efforts are bearing fruit as suspected online traffickers are arrested every month.

Some suspects were arrested this year in Cordova town, Lapu-Lapu City, Tacloban City and Biliran town.

Cordova, a fishing town on Mactan Island, has been described by law enforcers as a hot spot for home-based cyberporn.

Last year, police arrested suspects in Bacolod City in Negros Occidental, in the cities of Cebu, Mandaue and Talisay in Cebu and in Bohol and Leyte, among other provinces.

Both Mandaue City and Cordova are taking a step further by requiring money remittance establishments to submit a monthly report on customers and suspicious transactions that may be related to cyberpornography.

There is a plan to replicate the local ordinances in all the other towns and cities of Cebu.

Señora said there would be no letup in the campaign against online sexual exploitation of children.

“Our children are supposed to be our treasure. We will try our best to go after those who exploit our children. We must remember that victims are potential perpetrators [if we do nothing to help them],” he said.

Sustained exposure to pornography leads to serious psychological disorders in minors and even adults, said Rosemarie Gonato, a psychologist who specializes in trauma and child abuse.

“Constant exposure to pornographic materials will register in the brain. The images are hard to erase, especially when one gets used to them,” Gonato said.

“The effect will set in later. That’s why they need long-term intervention,” she said. “How long? That would depend on how a child copes.”

Life in prison not enough

Gonato said the child victims were made to believe that cyberpornography was “not actual, sexual contact, that it’s not a direct invasion of the body.”

The children, she said, think cyberpornography is normal because their parents are involved in it.

“They believe that whatever their parents teach them is right,” Gonato said.

The parents of the children who were rescued from a cybersex operation in Cordova town in 2011 have been languishing in jail for seven years, awaiting the outcome of their trial on charges of child pornography, human trafficking and child abuse.

“The cases have been submitted for decision,” said government prosecutor Lolita Lomanta.

Judge Ferdinand Rafanan of the 55th branch of the Regional Trial Court in Mandaue City will hand down the decision after three other judges who also heard the cases have retired.

While it may be painful for the children, Lomanta said she hoped the parents would be convicted.

“Just imagine exploiting your own children. If you think of it, life imprisonment is not enough for them,” she said.

“This must serve as a lesson for every parent or any member of a family who takes advantage of children. Up to now, there are a lot of children being exploited by members of their own family. There are just people who have not learned their lesson,” she added.