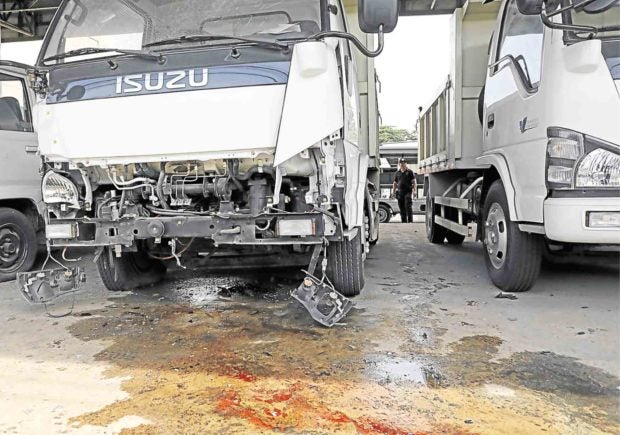 MEANT TO SCARE A truck on display at Peter Lim’s dealership in Mandaue City was damaged by the bombing. TONEE DESPOJO / CEBU DAILY NEWS

CEBU CITY — Controversial businessman Peter Lim, facing a government investigation after he was tagged as a drug lord by President Rodrigo Duterte, sought the help of the National Bureau of Investigation after a truck dealership he owned was bombed.

Jun Fuentes, a spokesperson for Lim, said the businessman wanted the NBI to identify the suspects in the bombing.

Fuentes said Lim would personally file a complaint at the regional office of the NBI to request an investigation.

“He’s very worried about what’s going on,” Fuentes told the Inquirer on Friday.

Lim, he said, would return to Cebu from Manila to face the threats to his life.

The bombing on Thursday of the showroom of Lim’s truck dealership firm Hilton Motors Corp. in the village of Subangdaku in Mandaue City was the second attack in a week on an establishment owned by the controversial businessman.

It also came three months after an attempt on the life of Lim’s younger brother, Wellington.

Patricio Bernales Jr., NBI regional director, said the NBI would help investigate the attacks but not provide security to Lim and his family.

“All the NBI can do is to investigate,” Bernales said. “We don’t have the manpower to secure him.”

“Anyway, there are lots of agencies out there where he can secure the services of bodyguards,” Bernales said.

Chief Insp. Mercy Villaro, information officer of the Mandaue City police, said investigators believed that the bombing at Hilton Motors was not meant to hurt since the explosive devices used were not powerful enough.

“Perhaps, it was just intended to scare someone,” she said.

A task force composed of the police’s Explosive Ordnance Disposal Canine Group, the Criminal Investigation and Detection Group in Central Visayas, and the Mandaue City police was investigating the bombing, its motive and the persons behind it.

Villaro said the bombing could also be linked to a labor dispute gripping Lim’s company as its officials had claimed.

She said, however, that investigators were still checking on the link between the bombing and the drug accusation against Lim.

Shortly after assuming his post, Mr. Duterte publicly identified Lim as a big time drug lord, a claim that Lim, who was cosponsor of the President at a wedding, strongly denied.

The Department of Justice was conducting an investigation of Lim to validate the President’s claim.

Villaro said police could provide security aides to Lim as long as he made a formal request and it was approved by the Philippine National Police.

On June 30, three suspects disarmed the security guard of Infinity KTV and Music Lounge in Cebu City, a bar owned by Wellington, and tried to set the establishment on fire.

On March 23, unidentified men also fired at a vehicle being driven by Wellington as he was leaving Infinity.

Wellington was unharmed but a security guard was killed while another security guard and two foreigners, who happened to pass by during the shooting, were wounded.