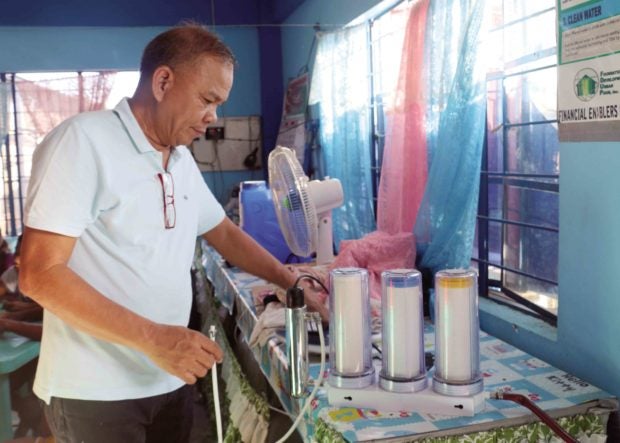 It has been 20 years since the 111 families living in the Del Rosario Compound at Barangay Coloong, Valenzuela City, last saw the ground where their houses stand.

Rising sea levels and several reclamation and megadike projects have turned this low-lying community into a catch basin, with farmlands now a swirling waterworld, said Rommel Laxamana, who lives in the compound.

It doesn’t help that Coloong sits near Manila Bay and is surrounded by three rivers that cut through Valenzuela City and Bulacan province.

But with fishing opportunities and other jobs nearby, people chose to stay in the compound and adapt to their peculiar, yet hazardous, way of life.

Ironically, despite the 5-foot-deep water that surrounds the community, it has difficulty accessing safe and potable water.

Typhoon “Ondoy” in 2009 and the heavy rains brought by “habagat” or the southwest monsoon in 2012 submerged the community’s water pipes and contaminated the water supply.

“It was a difficult time,” Laxamana recalled. “We were forced to get on our makeshift rafts and search for sources of clean water for hours.”

Things changed early this year, however, when a solar-powered clean water system was installed in the multipurpose hall.

The project — a partnership between the homeowners’ association led by Laxamana and the Foundation for the Development of the Urban Poor — uses a system that harnesses the power of the sun and the abundance of rainwater. 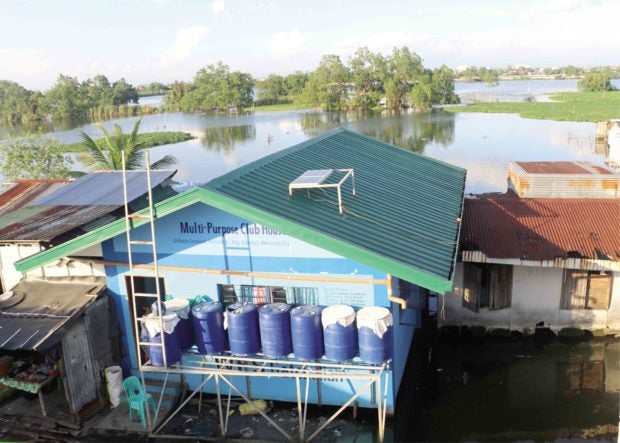 SECURE SUPPLY With solar panels on the roof and eight drums for storing potable drinking water, this water-logged community is well-prepared for any disaster. —CONTRIBUTED PHOTO / MARVIN ANICETO

Designed by Ateneo Innovation Center (AIC), which has been providing units and training to communities battered by disasters, the solar-powered system uses a fairly simple setup.

The crucial part, however, is the ultraviolet filter that disinfects the water and makes it safe for drinking. In this setup, the light is powered by a 50-watt solar panel placed on the roof, ensuring that the system would continue to function even if typhoons or earthquakes disrupt the power supply.

The solar panels also light up an LED bulb and has an outlet that can charge cell phones, crucial for much-needed communication during disasters.

If used and maintained correctly, the system can produce four liters of clean, potable water per minute.  Eight water tanks can provide for the families in the Del Rosario compound for at least four days, Laxamana said.

Paul Cabacungan, the AIC’s head of operations who oversaw the project, said water scarcity was often the foremost challenge that communities face after calamities, followed by food and electric power.

Arnaldo Antonio, head of Valenzuela’s disaster risk reduction and management (DRRM) office, said that during calamities, government response could be delayed by as many as three to seven days.

“This is why communities must learn to be resilient. At the forefront of (alternatives) are sources of renewable energy, such as solar power, and other green technologies,” he said, adding that such alternative energy sources are less likely to be disrupted despite calamities.

And yet, despite the critical role of renewable energy in disaster resilience and response, it has “yet to be optimized” by disaster frontliners, including local governments and communities, said the Institute for Climate and Sustainable Cities (ICSC).

Golda Hilario, ICSC’s associate for program development, said renewable energy had yet to be integrated in the DRRM strategies of national and local governments, as well as international humanitarian groups.

“Energy is often overlooked as it is assumed that government and power utilities will be able to readily restore power,” said Hilario. “This is a killer assumption that even seasoned humanitarian actors have only recently realized.”

“We can continue to adapt to the worsening conditions, but if we do not address our emissions, then we are negating our own investments in climate change adaptation,” La Viña said.

Data from the Department of Energy showed that the country remained heavily dependent on coal, which comprised half of the country’s energy mix last year.

Like his neighbors at Del Rosario, Laxamana said they would continue to regard solar power as a lifesaver.

“We are a community shaped by calamities as we survive one strong storm after another,” he said. “But with this technology, we feel less afraid and more prepared when calamities happen.”

Read Next
JBC announces start of search for CJ
EDITORS' PICK
We Can’t Guarantee You’ll Win a P20 Billion Jackpot, But We Can Help You Try
Foreigners prepare to flee as China virus toll tops 100
SM continues to send relief assistance to remote towns in Batangas
Best Gift Ideas in the Philippines
Sex on the menu for Pogo workers
First female commodore named
MOST READ
Sex on the menu for Pogo workers
‘Normal people doing normal work’ need not wear mask – WHO official
Kobe Bryant gear pulled out of Nike online store in wake of his death
Lacson on VFA impact study: ‘Better late than never’
Don't miss out on the latest news and information.