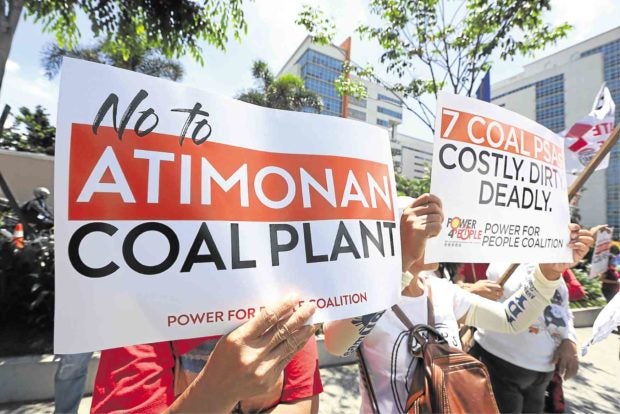 FIGHTING COAL Residents of Atimonan town, Quezon, and members of the group Power for People rally on Ortigas Avenue on June 5 to protest the continued construction of another coal power plant in Quezon province.—NIÑO JESUS ORBETA

LUCENA CITY — Led by a Quezon Catholic priest, protesters gathered on Thursday in Manila to protest the proposed another coal-fired power plant in Atimonan town in Quezon province.

Msgr. Noel Villareal, of Our Lady of Angels Parish in Atimonan town, and some of his parishioners joined a rally at the office of Atimonan One Energy (A1E) in Manila to condemn the ongoing construction of the power plant in the coastal village of Villa Ibaba.

“We continue to stand against the destruction of our province,” Villareal was quoted as saying by a statement from the group Power for People (P4P), which is demanding a stop to the use of highly polluting power sources.

Quezon province is already host to the 1,500-megawatt coal-fired plant in Mauban town, along the shores of the Pacific Ocean and combined 420 MW and 735 MW power plant of TeaM Energy Corp.  and Aboitiz Power Corp.  in Pagbilao town facing Tayabas Bay.

Erwin Puhawan, P4P member, said the construction of the Atimonan plant, with a projected capacity of 1,200 MW, continued although lacking in two key documents — a power supply agreement  and an environmental compliance certificate.

The host community, he said, continued to oppose the issuance of the two documents.

A1E, developer of the plant and incorporated in June 2014, is a wholly owned subsidiary of Meralco PowerGen Corporation (MGen), the power generation arm of Manila Electric Co. (Meralco), the country’s largest power distributor.