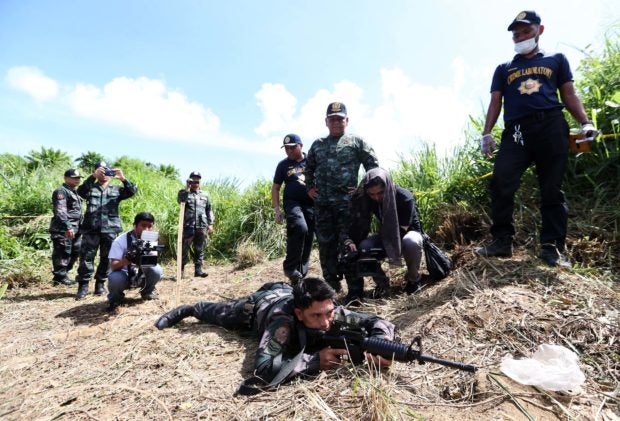 REENACTMENT A Special Action Force commando aims his firearm from a spot on an elevated ground where the alleged assailant of Tanauan Mayor AntonioHalili shot the local official during Thursday’s police reenactment of the killing. —LYN RILLON

The family of slain Tanauan City Mayor Antonio Halili believes the government was behind his killing, according to Sen. Panfilo Lacson who said on Thursday that he had launched his own investigation and that he already had a possible suspect.

Lacson, a former Philippine National Police chief, also said he knew Halili when he was still in the service and had never heard of the mayor being involved in the illegal drug trade.

And given the way Halili had been put under surveillance prior to his killing and that he was shot from a distance by an apparently well-trained shooter, Lacson said those capable of doing that were either from the government or a well-organized and well-financed criminal group.

Presidential spokesperson Harry Roque dismissed as “speculation” the Halili family’s belief that the government had a hand in the mayor’s killing.

Roque said the police was looking at several possible motives that included the mayor’s alleged involvement in the illegal drug trade, politics and business.

Speaking against the recent killings of priests and town officials, Vice President Leni Robredo on Thursday urged Filipinos to resist the “growing culture of violence.”

“Our combined voices are our weapon against the culture of violence and killings. Let us show in our words and deeds the true face of the Filipino: Helpful, not violent; who fights to save lives, not destroy them,” she said during a visit to Tarlac.

Lacson said it was a “big challenge” for the government to solve Halili’s killing “only because it appears to be stage-managed.”

“There was precision [in the way Halili was killed]. And as indicated to me by the family when I visited [Halili’s wake last Wednesday], they were implying there were indicators that it was possible the government could be blamed for it,” the senator said.

Lacson said he spoke to family members of his “longtime friend” whom he met when he was still a young police officer and became “well-acquainted” with.

“[Halili] was not a saint or an angel. That much I can say. But his being involved in drugs, at least with the limited network I also have, I know he has no involvement,” he said.

Lacson, however, said that the slain mayor was involved in illegal gambling, particularly the numbers racket “jueteng.”

“That I can attest even today,” he said. “I don’t know if he stopped already. At least when I was chief PNP, I knew that he was operating.”

He said Halili’s family told him the mayor had been under surveillance for at least four weeks and those involved.

To help the family, the senator said he was investigating Halili’s killing on his own and that he would share his findings with the PNP.

“More or less, I have an idea who is the possible suspect,” he said, declining to give details.

He said police and military men were capable of shooting at targets from a long distance as markmanship was part of their basic training. Civilians can also get that training, he said.

He recalled that when he and his former PNP colleagues would conduct stakeouts and surveillance on crime suspects they, too, used fake car plates.

“The government should solve this to disabuse the thinking of the family that the government has a hand here,” he said.

The National Bureau of Investigation will be looking into the possibility that the murders of Halili and General Tinio, Nueva Ecija Mayor Ferdinand Bote on Tuesday could be part of the plot to destabilize the Duterte administration, Justice Secretary Menardo Guevarra told reporters.

Guevarra said he issued the order to the NBI following Roque’s statement that Halili and Bote might have been killed to “erode confidence in the President.”

The Nueva Ecija provincial government has put up a P1-million reward for those involved in Bopte’s killing, according to provincial administrator Alejandro Abesamis.

The Inquirer, meanwhile, obtained a copy of an Oct. 19, 2017 report by former Tanauan police chief Supt. Audi Madrideo who disputed a police intelligence report called IR D2-20 alleging that Halili was involved in the drug trade.

Madrideo vouched for Halili’s “all out war” against illegal drugs, saying that the late mayor submitted its list of suspected drug personalities to the police for validation or operation.

Police searching the grassy knoll where the man who shot Halili had positioned himself recovered on Thursday an empty casing for a 5.56 mm. bullet, the same caliber of the slug recovered from Halili’s chest.

PNP chief Oscar Albayalde told reporters that the investigating task force was looking into the possibility that Halili’s killing could have been triggered by the slain mayor’s land dispute with a “general.” He did not say whether it was a police or military general.

Lacson welcomed a dialogue between the President and local officials and that this will help clear any misunderstandings and apprehensions.

Roque said President Duterte was open to a dialog with local officials belonging to the Union of Local Authorities of the Philippines (Ulap) who were concerned about the killings of the two mayors.

There has already been an initial consultation with acting Interior and Local Government Secretary Eduardo Año and Albayalde, he said.

Roque said the local officials wanted to participate in the vetting of the government’s list of so-called narcopoliticians.

The Negros Occidental Association of Chief Executives (ACE) and League of Municipalities in the Philippines joined other local officials in condemning the killings of Halili and Bote.

The mayors’ statement was issued at a joint meeting of both groups in Bacolod City on Thursday, where they also sought police protection.

Victorias City Mayor Francis Frederick Palanca, who chaired the Negros ACE, said it was the responsibility of the police to solve the crimes, whether the slain government officials were allegedly involved in narco-politics or not. —WITH REPORTS FROM MARICAR CINCO, JEANNETTE I. ANDRADE, MARICAR CINCO, CARLA GOMEZ, ARMAND GALANG, JEROME ANING, MARIA ADELAIDA CALAYAG AND YOLANDA SOTELO